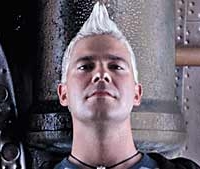 10/12/2009 : After the release of the brand new single Party i Provinsen, Hej matematik (featuring Søren Rasted, one of Aqua's members) will release a new album in January (called Alt Går Op I 6, meaning "Everything Goes Up in 6" in Danish). They also plan a 14 days tour for this spring.

(Soren, aka Spike, Champ, Sønne)
Producer and writer for the group Aqua .

Soren was born on 13th of June 1969 in Blovstrød (Denmark). He is brown-eyed, 1,81 m tall and weights 72 kg. He has a sister, Lise and a brother, Jesper. His father is an architect and his mother a  physiotherapist. He likes Mexican food, sushi and Korean BBQ. He also likes listening to the group The The, and collecting shampoo samples he finds in the hotels. His favourite movies are Evil Death 2 and The Celebration. He likes watching TV shows such as NYPD, the Simpsons or You've Been Framed. After his Business school, he became a salesman, then a paper boy. With ClausNorreen , he's been since 1989 a member of  Joyspeed (they started composing music for a Danish movie) and enjoyed a solitary success in the Danish charts with Itsy Blitzy.

'People either puke when they hear Aqua, or they like it.' said Soren to a UK magazine recently. As a matter of fact, Aqua's is the sort of music which attracts no wishy-washy response, and together with Claus, Soren is chiefly responsible for establishing Aqua in the first place and producing said chunder-making melodies. He's not afraid to experiment; the first single that made the grade in their home country, My Oh My, found he and Claus playing 17th century instruments instead of the usual 20th century gizmos. Success has been a long time coming for Soren and the band, but when it finally hit, it with big: 'I think it's because we dared to be a bit different,' Soren explains, 'and got lucky!' First and foremost, it's making music that Soren loves : all the other trappings of fame he's not that bothered about. 'It's not much fun when we have about 27 interviews in one day,' he said recently. He misses his family too. 'We only get to see them every couple of months or so.'  Whether he likes it or not, he's not likely to see that much of them in the future either, as Aqua continue their inexorable rise to the top of Planet Pop!

2004 : Søren Raasted created a project called Lazyboy, co-produced with Johnny Douglas (well-known for his work with George Michael, Kylie Minogue, etc.), featuring voices of artists such as Andrea Grant and Greg Geraldo. The album Lazyboy TV peaked on the danish album-chart as #14, and the first single Facts Of Life peaked as #2 on the radio-airplay-chart and #11 on the dancechart. The music wasn't dance but more "rhythm and speak".

Another track from the album Underwear Goes Inside The Pants did quite well on radios in USA, and the album was released in the US on the 2nd of November (actually it was released in 5 different languages in total). And success went on... With a #1 spot on the iTunes Usa download, and 7 weeks as top 5. He also enjoyed massive airplay on american radios and MTV. His 2 first singles were hits in many other countries as well.

2009 : Hej Matematik won Danish Hit of the Year with the single Walkmand at Zulu Awards 2009. In November, they released the single Party I Provinsen.