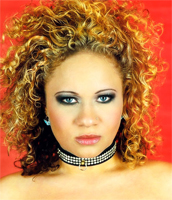 21/05/2019 : Alexandra Prince announced a new collaboration, this time with the Daft Punk

27/08/2017 : Alexandra Prince was featured once again by Plastik Funk, on single Damaged Heart.

Real name : Alexandra Prinz. Alexandra's Brazilian mother toured the world as a dancer in one of the most successful Brazilian Dance-Groups of the 70's, then moved to Hamburg to settle down with her German husband. This is where she was born in 1975 and still resides.

Alexandra sang her way from the karaoke-bars of Hamburg's Reeperbahn into the best music studios in Germany. At just 14 years of age she had her first taste of professional studio work. She appeared on Bed and Breakfast's You're The One in 1995. According to rumors, she was also the real voice of Blümchen (at least she confirmed she contributed to vocals) and Sqeezer (Jasmin Wagner and Lori Stern being only lipsyncing)

She sang nearly every Top Hit for the Booya Family and also Nana's #1 hit Lonely. Her first solo single How We Livin, a duet with Mazaya, was a top 30 hit and stayed in the charts for a full 16 weeks.

2002 : she did vocals on Neo Cortex's hit single Elements, Aquarius My Girl (La Da Di Da Da....) and DJs @ Work Time 2 Wonder. She probably also did vocals for Laava - Wherever You Are (I Feel Love)

2003 : she was featured on Phantom Black's single My Love and on Nalin & Kane vs Denis the Menace Cruising. She co-wrote Vanessa S.' single Shining and the girls band No Angels' Angel Of Mine. She was also said to have done vocals on Neo Cortex's 3 following singles : Don't you, Storm of Light, I Want You .

Since the song So Many Times by Gadjo feat. Alexandra Prince became a massive international club hit in 2005, Alexandra earned a place as an established, well-respected and well-loved House-Diva. The song which she not only sung but also wrote, reached #1 in the Worldwide Dance Charts, and #22 in the official UK single charts. A really important moment for the artist was undoubtedly her outstanding performance at the House Music Awards in the UK, at which So Many Times was nominated as Best Song.

2006 : she cooperated with the Swedish DJs Steve Angello and Sebastian Ingrosso on the project Fireflies & Alexandra Prince I Can't Get Enough. She also took part to the project Locktown for the single Alive.

2007 : Alexandra was working together with major house music producers from around the world in the making of her debut album. She has so far being recording with Steve Angello, Sebastian Ingrosso, Syke'n Sugarstarr, Till West & DJ Delicious. Alexandra also wrote songs for Oliver Moldan, DJ Moguai and the label Deep Dish. The single Rising High was released in June.

2014 : she worked with Bellini on their single Samba du Brazil, providing background vocals

2015 : Alexandra visited Brooklyn Bounce's single We Got That Sound

2016 : Alexandra Prince did vocals on Ben Delay - The Boy Is Mine, on Mark Lower - Always On My Mind and on Aleksey - Sunrise. She teamed with Cat Deejane to release single Think About You.

2017 : Alexandra was featured on Jay Frog' singles Keep On Searching and Just Be Good To Me, and on Chris Montana & Vinylsurfer - Can't Get Enough.

Thanks to Tavi Meran