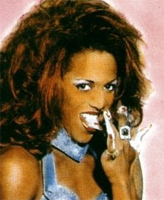 Ian David Smith aka Primax had been working as a mainframe (CICS) Systems Engineer throughout the 80's and early 90's. Under the name of Ian D, he started deejaying in the early 1990's at club Heaven (known as "Europe's biggest gay night club"). He's been spinning records every Saturday on the main floor between 10pm and 4am for nearly 3 years. Between 1994 and 1996, he worked as a music journalist for the American dance music magazine Dance Music Authority (DMA), remixing several Top 20 records, and producing three of his own singles through Media/MCA Records. His first record was #1 in Israel, visiting Top of the Pops, and getting several of his remixes played on 1 FM (a.k.a. BBC Radio 1).

Then he was approached by two separate sets of producers who were interested in working with him. The first of these was Peter Pritchard, who ran the UK branch of the Italian Media Records label. The second comprised Phil Harding and Ian Curnow. They had worked at PWL for legendary dance producers Stock, Aitken and Waterman, and were now working on their own under the name of The Power Syndicate. This led to a series of remixes being released under Primax (for 49ers, Deuce, Clock, Sharada House Gang, 2wo Third3, Traci Lords, Ann-Marie Smith, Scanners, Pandora...).

Ian Smith founded Prime Cuts Ltd to capitalise on possible income from DJing. The name came from the title of a free dance music review newsletter he had used to help promote the music he played at his first gigs at The Paradise Club in Islington. He took up a full-time job at Media Records and condensed the company/newsletter name and slogan ("Prime Cuts - to the max!") to come up with his remixer name of Primax.

The single Sound The Alarm featured the voice of Kimberley. It was written by Ian Smith and Peter Pritchard (who was also executive producer), produced by Primax, released under Media records UK. Strangely, it was not licensed in Italy uunder a Media records label, but under TOP Secret Recordings (a sublabel of Dig It International).

After a promo single entitled Tequila recorded in 1995, followed the singles Music and Pure in 1996.

Ian Smith loves skydiving. he describes himself as grumpy and irascible.

Thanks to reBeL and BroderTuck

Listen to Primax on Radio Euro Classic, the eurodance radio