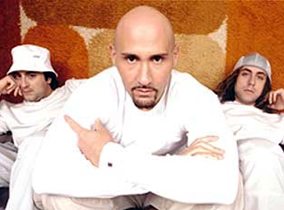 11/07/2015 : Prezioso and Fabri Fibra's forthcoming single will be entitled Alza Il Volume. It premiered on Time Radio on July 10th and videoclip has just been shot.

19/11/2014 : After Brakeless, Giorgio Prezioso collaborated again with Ninni Angemi on single Dragon, out on November 24th on Hussle Recordings.

05/07/2014 : Giorgio Prezioso teamed with Ninni Angemi for the single Brakeless. It premiered yesterday on Hardwell On Air radioshow and will be included on Revealed Recordings Presents Festival EP Vol. 2, out on July 14th.

Prezioso is pop-dance project produced by Media Records. The tracks released are produced by Prezioso and Alessandro Moschini aka Marvin.

Giorgio Prezioso has been working since 1991 as a radio deejay and moderator at "Deejay time", which had reached the status of one of the most popular radio broadcasting of Italy. Before he used to deejay at the club "Veleno", collaborating with Italy's most well-know rapper Lorenzo Cherubini alias Jovanotti. He shares his passion for music with his older brother Andrea (32). "Music is my life. Even in my limited spare time I am constantly in CD shops or composing songs with Marvin", he says. Marvin (27), third guy of the project, has been playing the keyboards and the piano since his childhood. He was member of more differently rock and new-wave bands, before he joined Andrea and Giorgio to produce the title I Wanna Rock.

Prezioso contributed to the eurodance movement with some singles. First came Get On Up in 1993. It was composed and written by Guglielmi, G. and A. Prezioso, and Passalacqua, released under DBM Department (DBM 003). Then, Anybody Anyway was performed by Viviana Presutti from Da Blitz under the pseudonym Daphnes. It was composed and written by Lobina, Prezioso, Presutti and Gabutti, released in 1994 under the label Inporgress (INPR 1070). Don't Stop also featured Viviana . She recalls : "Prezioso is a very funny person. (...) Everytime he came to the studio, we had fun. He's always smiling. It was a pleasure to work with him".

Feel The Rhythm featured the voice of Clara Moroni.

The first single to be released with Marvin is Tell Me Why in 1999. It became a big hit.

In 2004, Prezioso released their new single entitled Le Louvre, a cover from the 80's. This song entered the official FIMI charts at #10, not quite beating their previous hit Voglio Vederti Danzare, which peaked at #7.

2006 : after some delay, the new single Survival was released as vinyl in August... in Germany only ! It contained 4 mixes (the fourth being done by Gabry Ponte).

2009 : Prezioso and Marvin released a new single in February, entitled I Believe (a cover of Marcella Detroit hit). Prezioso has a radio show called Prezioso in Action every saturday from 17:00 to 18:00 on radio m2o, then daily from Monday to Saturday at 15:00. He also hosts the show Disco Ball on Radio Deejay.

Prezioso feat Marvin's new single is entitled Happy Flight (The Never Ending Story). It was included on the new compilation Prezioso In Action, released in May. In November, they covered the classic anthem The Riddle, already covered a few years ago by Gigi d'Agostino.

2010 : in Decembre, Prezioso released the second volume of his compilation Prezioso In Action.