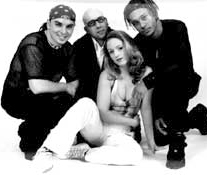 Poco Loco Gang was a successful Belgian project. They came up with a new sound, called the happy house, actually invented in discotheque Poco Loco, the club where Fred Vandermast (2 Black 4 U-Oxyd) and Reinier were DJ's at that time. After a lot of experimenting poco loco was born : a nice sound with a funny voice mixed in it. Together with the sound a new project was born : the Poco Loco Gang. The single became a big success in January 1999 and a group was formed : it deatured a singer named Saïda, a dancer named Mike and a robot.

Poco Loco stayed 5 weeks at the # 2 in the Ultratop 50 and they received a golden record for selling over 25 000 singles in Belgium. This unexpected success seemed to give them inspiration and soon an follow-up single was created, called Let's Go To The Party. 3 weeks after the release of this second single, they could be found back in the top 10 of the Ultratop 50. Also in the Netherlands, people were fond of this new sound.

Fred quitted the project (personal reasons?) and also the singer and dancer couldn't combine it anymore with their other activities. By the time that the third single Tropical Paradise was released, a new group was created. Fred was replaced on stage by Patrick (alias Patje Loco Gang). Severine became the new singer and Moustic and James took care of the dance act.

Poco Loco Gang released also a fourth single Come Along and a full-cd-co-produced by Phil Sterman. The CD contains 13 tracks including the three hits and the 3 original mixes and the videoclip of Tropical Paradise.

And then it became very quiet for a while because they came back. People had not forgotten their successes yet which the Loco Gang considered an advantage. What was changed is the people of the Loco Gang, a lot of faces on stage. Kirsten, a 21 year old girl from Maasmechelen, became the new leading lady of the group. She could be seen in the past as the singer and dancer of DJ Sakin & Friends.

Marco and Mendo were the 2 new professional dancers of the Loco Gang. Both guys had an impressive 'palmares'. They danced together for Marisa (Paradisio), Sharon Williams, Marissa Turner,…. They grew up together, pracitced together and were inseparatable dancepartners.

The group changed the name and also the sound. The Poco Loco sound was replaced by a Loco Sound, an amusing sound with a lot of bass and beats and a very recognizable, catchy refrain.

Sunshine On A Rainy Day was written by Sven Maas and Yvo Donckers. It is a happy song with a lot of 'hitpotential'. It's the come-back song for a group that has never disappeared out of the charts. Europe is more than ever excited about the project. Positive reactions came from the Netherlands, Scnadinavia, Spain, England and France.

In October 2000 was a new single Yaki Yo Yaki Ye released, another hit ranked for several weeks in the hitlists.

Now it seems that the, (Poco) Loco Gang is completely history mainly due to juridical problems with management and record company.

2005 : Poco Loco Gang are back, with a female vocalist called Chantal and a drummer called Bart. They released a singles called Chirpy Chirpy Cheep Cheep. And they prepare a 2005 remix of their big hit Poco Loco.