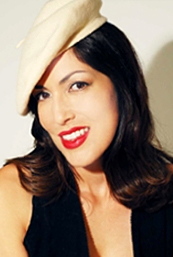 01/02/2009 : Plavka will release this year an album called Plavkalicious on an independent label based in Los Angeles called Wheat Recording (thanks to eurodance blog)

15/08/2007 : Plavka did a collaboration with Nu Frequency the song called Love Sick (thanks to Tavi Meran)

29/12/2002 : Plavka, former vocalist for Jam & Spoon, released a single with the project Mistral called Your Everything.

Croat-Peruvian singer Plavka Lonich was born in America on March 25th 1968. In 1985, she began vocal training. In 1989, she became a Member of Santa Monica Opera as soprano. In 1990, she moved from Los Angeles to London. In March 1991, she joined The Shamen and their track Hyperreal became a UK Top 30 hit. In April 1991, they went touring. 'The Shamen Synergy Tour' included 8 UK venues from Glasgow Barrowlands to Manchester Academy and London Town & Country Club. In May 1991, The Shamen promoted their hits with Plavka and appeared on numerous UK TV programmes such as 'Dance Energy', 'The Chart Show', 'The Big E', 'Live & Kicking and 'Hypnosis'. In June, The Shamen started their first European tour including various TV promotion appearances. In August, Plavka performed with The Shamen in Moscow and Siberia.

Then in December, Plavka formed the group called Rising High Collective with Casper Pound & Marc Williams, releasing the critically-acclaimed single, Fever Called Love in 1992 (6 mixes-Rising High Production LTD UK). In 1993, Rising High Collective released their second single Reach and performed on 'The Hitman & Her' plus done a club tour in Germany. Then, RHC released the single No Deeper Love and performed at The Limelight in New York, Ministry Of Sound in London, Universe (Bath) and at the Mayday Rave in Berlin. In 1994, Fever Called Love was re-released with new mix by Hardfloor on Rising High Records.

In February, Plavka released a solo single Maximum Motion on Ascension Records. She was also vocalist on Sound Assembly's track, Live In New York, released on Moonshine Records in the USA. Then she joined the German band Jam & Spoon and became their featured lead vocalist on the single Right In The Night (Dance Pool Germany/Sony Music Europe/Epic USA). The track became N°1 in Spain & Finland, Top 10 in Germany & Norway, Top 30 in the UK.
The video was on hot rotation on MTV and VIVA with 2 slightly different versions. In Spring 1994, Jam & Spoon began an extensive European Tour supporting Right In The Night and Plavka's solo material was comprising both prestigious club dates and promotional TV appearances.

In April Rising High Collective released the critically-acclaimed Liquid Thoughts album. In May-June, she continued the Jam & Spoon extensive European tour with both live and TV shows. In July, she was still featured as lead vocalist on Jam & Spoon's new single Find Me (Odyssey To Anyoona).

Right In The Night attained Gold Record status in Germany and Plavka was presented with a Gold Disc at a celebration party. Right In The Night attained Platinum status in Australia while Find Me video was on hot rotation on MTV Europe, MCM and VIVA and was the highest climbing single on the German charts. In August 1994, Right In The Night is in the Top 3 of the US Club play chart for the second week. Plavka undertook an extended promotional trip to Canada, playing live on 'Electronic Circus', Canada's biggest music TV show. In Autumn 1994, Plavka toured through Italy, Finland, Germany and Lithuania, performed on Dance Machine, a TV show in France gathering 17,000 people ! She also made another TV appearance on 'Big Bubbles' in Munich as well as doing radio interviews with RPR Radio and Hit Radio N1. In November-December, Jam & Spoon featuring Plavka were nominated for Best European Dance Act at the first ever made MTV Europe Awards. Plavka also performed at an Aids Benefit concert in Berlin.

In 1995, the new Jam & Spoon single Angel (Ladadi O-Heyo) was featuring Plavka, the very violent video was broadcast censored on MTV and uncensored on VIVA but not in high rotation anyway. Her latest hit is still with Jam & Spoon in May 1997 on the melodious and smooth single Kaleidoscope Skies.

In 1997 she became a part of the project Caspar Pound to sing the song Fever Called Love. More recently, in April 2002, her voice was featured an eurotrance single of Mistral called Your Everything, released under the label Black Hole.

2006 : Plavka still lives in London, she recorded a few tracks such as Read My Lipstick Lips, Be My Sundae or Sugafunk for a future solo album.

2009 : Plavka will release this year an album called Plavkalicious on an independent label based in Los Angeles called Wheat Recording

2012 : she was featured on Swagger's single Redlight Town.

Listen to Plavka on Radio Euro Classic, the eurodance radio