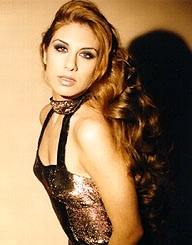 Born Katherine Filippeos, Alexia Phillips is a professional musician and entertainer. She has been studying music since the age of 6. Her main instruments of study include piano, guitar, vocals, and flute. She is currently majoring in guitar performance at the Royal Conservatory of Music, and participates in various classical guitar concerts and recitals. During the last four years, while coninuing her musical studies, much of her time has been dedicated to teaching piano and guitar in her family owned music studio. Since the tender age of 14, her other musical assets have included playing piano and singing lead vocals with a Toronto based band. This experienced performer has played in over 200 clubs and concert halls in Canada and in the United States.

Alexia's very first studio experiences were with her brother (producer/singer) Chris Phillips. The two worked closely together writing and producing their 1994 debut album entitled Always Thinking Of You. The album showed notable success, storming the dance floors and achieving airplay in Canada, as well as various stations throughout the U.S.

Alexia is also known for writing and producing for other popular artists. In 1995, she co-wrote and co-produced Lil Suzy 's two hit singles When I Fall In Love and Now And Forever. In the same year she collaborated with her brother, Chris Phillips and singer/producer Adam Marano from Collage. This resulted in an album entitled Marano/Phillips which proved to be successful in the dance/freestyle market.

One of Alexia's most recognizable hits include I Never Needed released with a Los Angeles based recording company, Interhit Records. The track went on to hit the Billboard Dance Charts, entering as a 'hot shot' debut and peaking at number #34. It also hit number #1 on the American DMA Dance Chart, as well as conquering numerous charts across North America. Her follow up single Undercover Lover also appeared on numerous American Charts.

Alexia's next hit You made a big impact on dance radio and entered several dance pool charts across Canada. Her self written single My Boy has already become a big success and her hot summer single Forever which was featured on the Planet Freestyle Volume 3 CD was a huge hit. In 1998, coming off the chart topper Forever, Alexia Phillips was back again. If You Leave Me Now is her latest release which features a duet with another great freestyle artist Stevie B.

In 1999 she started collaborating with the Italian remixers of the Factory Team, resulting 2 singles which were licensed by Odeon records under the SAIFAM eurodance label 21st Century : Dance With Me and Can't Stop. The first one was produced by Chris Phillips & Gus Phillips, originally recorded at Odeon Studio, the second one was produced by Rachid & Ian, originally recorded & mixed at Billy's Creation Studios in Toronto (Canada).

Alexia Phillips was working towards her first solo album which would include past hits as well as fresh new materials.

2009 : she released Nothing Is Impossible under her real name. She nowadays lives in Europe.

Thanks to Broder Tuck and Gianni