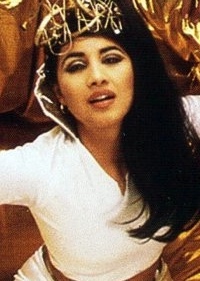 06/04/2019 : Pharao singer Kyra Pharao and Will Gibbs were featured by Lazard and BK Duke on single 4 o'Clock (In the Morning).

19/12/2018 : Kyra Pharao was in studio to record new songs. It is not mentioned wether it was for Pharao or another project...

31/12/2016 : Pharao frontlady Kyra and Siam, who currently performs on stage as Pharao rapper, recorded together a single entitled New Day.

21/12/2013 : Kyra, former Pharao singer and frontlady, and Will Gibbs, were featured on Lazard vs. BK Duke 6 o'clock (We Rock), inspired from Beverly Craven's hit Promise Me first verse.

16/06/2013 : Kyra Pharao recorded a collaboration with German house DJ and producer B.K. Duke. All remixes for the single will be finished in 2 weeks. They already started working on the second single should start next week. In 2009, B.K. Duke had remixed Yves Murasca feat. Kyra's Saxophobic Satisfaction.

Kyra is a black-haired girl, born 17th January 1971 in Cairo. Her mother is Egyptian and her father is Indian. She has a younger sister called Melina. According to what was written in an interview, Pharao is the real last name written on her identity papers... But it was revealed later that her real name is actually Claudia Banerjee.

Kyra is 1,58 m tall. After her parents divorced (as she was only 10), she came to Munchen. At this time she really felt alone so she started singing in front of the mirror of her bedroom. Then she started singing in choirs. Afterwards, she did 5 years of classical music studies and 10 years of ballet. After this, her voice was powerful enough to sing solo in churches...

She was 24 years old when Pharao was created. She became the female vocalist of the project in 3 hours : "A recommendation, a call, a travel into the studio... a hit" she explains. She contributed to some songwriting too. Kyra soon left her former job in an advertising agency to give her full time to the group. She became a snake-lover, she owned the python Pythi (aka Petit), the one we can see in the video of I Show Secrets.

According to rumors, she had also released a solo single produced by the Masterboy team, but she finally revealed this was a hoax.

In 2003, Kyra's voice was featured by the project Seven for the single Spaceman Came Travelling. She currently lives in Munchen.

2004 : Kyra is preparing a solo album. She also produces and promotes newcomers in the music business. She recorded ads for well-known brands such as Disney, Marienhof, Blue Mobile and Tricontes. She worked with Uwe Hackbarth, Pro7

2005 : she did vocal coaching for international acts at Universal Music, and worked as guest singer for several house projects for Diamondhouse Records.