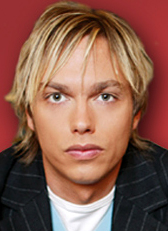 29/04/2020 : Regi's next album will be entitled Vergeet De Tijd (means "Forget the time" in Dutch). It will gather his recent hits as well as the song he recorded for the TV show Liefde Voor Muziek

Reginald Paul Stefan Penxten was born on March 4th, 1976 in Hasselt. He started playing the guitar on an early age. When he was 12, he bought his first computer and connected it to a synthesizer. At this point in his life he started to compose, attending a music academy to learn to read music.

When he was 18, he released some underground and trance EPs on the Dance Opera and Illusion labels, and decided to make it his carreer. But, since his parents wanted him to have a good education, he studied Telecommunication-Electronics. His success started with Milk Inc's La Vache in 1996, which was a big hit in France.

Aside Milk Inc., he started other projects with several singers and other producers : Sylver, Flesh & Bones, Tiny K., TLD, Outworld, La Luna... He also started deejaying, starting with small parties, then becoming resident DJ at Club Illusion. But after the international breakthrough with Milk Inc. He did not have much time to DJ.

Regi teamed with some DJ's and the owner of club Illusion, to create the record company Art Group Music (AGM), wee he worked as studio engineer and started his own label called Sookie. He also has his own radio show called Trance N Dance, that he produces and presents. He also did remixes for many artists and projects such as Duran Duran, 2 Unlimited, 2 Fabiola and Boney M, composed for Katerine and Jessy.

2004 : his voice was featured by Trancelucent on the single Lonely

2005 : his very first solo single was entitled No Music

2006: Regi released with Wout and Caren Meynen the single Larger Than Life.

2007 : Regi's new single was a collaboration with the choir Scala entitled I Fail. Jim TV started a second season of Regi's World, the real-TV program following Regi's daily life. After a second sold out Supersized concert series, he was nominated to the TMF Awards where he presented his brand new single : AAA Anthem, a duet with Bart Peeters, from his first solo album REGIstrated. In November, he appeared in a TV commercial for the Belgian Humo.

2008 : Regi composed a song for the girls trio Ellis-T which will compete for Eurosong 2008, the competition to chose who will represent Belgium at ESC. February : Regi Penxten's new single was entitled Punish, a collaboration with Koen Buyse. The videoclip is ready. On April 4th, the first solo show of Regi Penxten will be held at the Lotto Arena in Antwerp.

2009 : Regi Penxten's next single was What Is Life, out in January, a collaboration with Danzel. On February 29th, he did a new Regi In The Mix solo show, this time in Hasselt.

In July, he released his new Regi In The Mix compilation, a double CD including all the hottest dance tracks of the moment (and of course the new Milk Inc and Sylver tracks).

Regi was back for a 5th season of Regi's World since September 2nd. His last album and Regi in the Mix 6 were both awarded platinum.

In September, the next single was released. Entitled Take It Off, it features vocals by Kaya Jones. Compilation Regi In The Mix vol. 9 hit the stores on December 3rd. His next single was entitled Runaway. It featured Tyler, who was already the voice of Loaded Gun. Regi was nominated at the MIA awards in the category Dance/Elektronica.

2011 : Regi is the hero of a new season of Regi's World on Jim TV, starting from January 9th. In March, Regi won a De Gouden Klaproos award for best songwriter. His new single from Registrated 2 was We Be Hot, featuring Ameerah and Turbo B. Videoclip was shot in LA. His new compilation Regi In The Mix 10 was released on July 1st.

2012 : In February, Momentum, a collaboration of Regi with Dimitri Vegas & Like Mike was released. In May, during second season of radio show Het Experiment on Qmusic radio, Regi presented a new song entitled Sharing You, featuring schlager singer Christoff. Regi and Elke Vanelderen got married (church wedding only, their civil marriage had already occured some time ago) on Saturday June 2nd. Ceremony in the church of Heusden-Zolder was broadcsted live on Jim TV.

2014 : in February, single Reckless came out. In April Regi released Invincible, featuring once again singer Moya. He was one of the coaches on The Voice van Vlaanderen. He collaborated with Yves V and Mitch Crown on the song Wait Till Tomorrow

2015 : in August, he teamed with Lester WIlliams featuring Patti Russo on single When It Comes To Love. Then he released his new studio album Voices end of October. He teamed again with choir Scala on single Elegantly Wasted. Shortly after, his new single The Party Is Over, a collaboration with Sem Thomasson featuring LX, was out.

2016 : in March, Regi released a collaboration with Wolfpack featuring Alessia entitled Light The Sky. In July, he released song Should Have Been There