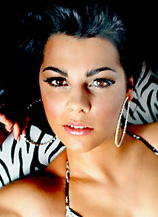 31/05/2019 : On stage, Paradisio is currently associated to Patrick Samoy's new project by The Latina's Sweet Dolls

21/06/2017 : Today, for their 20 years of carreer, Paradisio released a best of album called Greatest Hits (20th Anniversary). Another album featuring original extended versions for DJ's and entitled The Hottest Summer Tracks Of Paradisio is also planned..

Records company : Arcade Belgium. It started around 1993 when Patrick Samoy and Luc Rigaux better known as The Unity Mixers (aka Unity Power) were deeply impressed by the outstanding voice of a Spanish girl named Marisa Isabel Garcia Asensio. Marisa was born in Malaga, Spain, but currently resides in Belgium.

The first release Un Clima ideal was immediately a smash hit all over Belgium. Their second single Bailando sold worldwide over 1.000.000 copies in less than a year (and 5.000.000 throughout the years). The sexy way in which Marisa sang 'Si senor...' probably reminded a lot of young people of their first summer holiday love. No wonder that it went to #1 in Belgium, Italy, Denmark, Norway, Finland... sold more than 450.000 copies only in France and was the best selling single in Sweden ever (triple platinum!!). The third single Vamos a la discoteca was bingo again. By using a wide range of coloured wigs for every public perfomance Marisa created for herself a distinctive image. In the meantime the full album has been released accross Europe...

Paseo was the last single featuring Marisa. There was also a vocalist called Angie B who appeared in some TV shows, lipsyncing over her voice. It is not known wether her appearances were official or not.

2001 : Paradisio released a remake of Vamos A La Discoteca, featuring the voice of Alexandra.

2003 : Paradisio, with a new team made of Peter Gillis and Jacques Bultinck (AB Logic), released a single called Luz De La Luna, featuring the voice of Maria del Rio. A video clip was shot on the beach of a "paradise island".

2009 : Paradisio released Bailando (me dices adios), which is a remake of the original Bailando, re-written by Shelby herself.

2010 : a digital re-edition of Paradisio's first album was released under title Tarpeia.

2015 : Shelby came back after giving birth to a child.

2017 : in October, Shelby left the project. She was replaced by Irina Sanchez. Christina Sorce was part of the Swedish & Norway tours.

2019 : Paradisio was fronted by The Latina's Sweet Dolls.

Listen to Paradisio on Radio Euro Classic, the eurodance radio