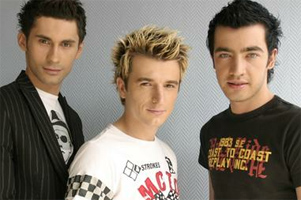 O-Zone was founded by Dan Bălan and Petru Jelihovschi in January 1998 in Chişinău (Moldova). Both were members of pop-rock band Inferialis. Their first song De La Mine was released the same year in October. The project's first album Dar, unde eşti... was released in 1999. The same year, in summer,they did their first tour in Moldova. In December Dan wrote a Christmas song called Sarbatorile de iarna for the Christmas release of the "Tanti Ludmila Show". Since then, this song has becomed a national song for Christmas and New Year Festival and was played everywhere during this period in Moldova.

Afterwards, Petru left the project, since had not intended to make music his career. Dan Bălan held open auditions for new band members. This is how Arsenie "Arsenium" Todiraş eventually persuaded him with his version of Elvis Presley's Love Me Tender. Then Dan Bălan received a call from Radu Sîrbu, asking for a chance to audition for the group. After a successful audition by Sîrbu, O-Zone officially became a trio.

In 2002, they moved to Romania, hoping to gain more recognition. This decision proved to be the good one : their single Despre tine ("About you") became an instant hit, which held the top position on the Romanian Top 100 chart for 3 weeks in February 2003. They released the album Number 1. But the song which brought them worldwide attention, was Dragostea din tei ("Love in the Linden Tree"). It firstly topped the Romanian singles in September 2003, then faded from popularity, before being covered in Italy by Haiducii without permission, which led to curiosity about the original artist. Time Records offered O-Zone a one-year contract, then Dragostea din tei was also released in various other countries in Europe under Polydor Records, becoming an instant hit in a dozen European countries in 2004. The re-release of Despre Tine in 2004 from the same album had similar success across Europe. The viral video Numa Numa Dance helped to slightly boost awareness of Dragostea din tei in the United States, but while the song received moderate to major airplay, most Americans knew it simply as the "Numa Numa Song" and never knew the name of the original song or the group that performed it.

On January 13, 2005, while still very popular, the members of O-Zone announced their disbandment for personal reasons. Their last European concert was held at the 2005 Golden Deer music festival in Romania. The same year, Japanese label Avex Trax gained distribution rights for O-Zone music in Japan, and released the album DiscO-Zone in August 2005 in that country. The album, which included Dragostea din tei, became immensely successful in Japan (over 800,000 units sold in 2005 alone, 12th most popular album of 2005). It was even re-released twice by Avex Trax. An unofficial album entitled Love Me Love Me was released in the US.