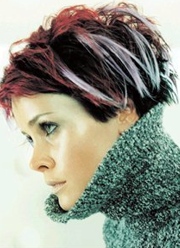 02/10/2011 : Nystrom Lene (Aqua) is announced as one of the coaches on the Danish version of real-TV show The Voice, along with Steen Jørgensen, Sharin Foo and L.O.C.. More infos here

22/01/2011 : Lene Nystrom (Aqua) shot a commercial for a Norwegian brand in South Africa. You can see the photos of the shooting on their official Facebook page.

17/11/2010 : In an interview for Danish Television, Lene Nystrom told that Aqua just finished recording a brand new album and that they had plans to release it next spring. The year, Lene is again the face for the new collection of the Danish jewellery Ole Lynggaard Copenhagen.

13/10/2010 : Lene Nystrom (Aqua) will be the guest star of a TV show called Litt av et liv (equivalent to the BBC program "This is your life") in which they will portraying her. The show will be recorded in November in Oslo, and should be broadcasted during Spring 2011.

02/08/2010 : Lene Nystrom, Aqua frontlady, will appear in a movie series entitled Varg Veum (from writer Gunnar Staalesen's novels). She plays the part of Karin, the girlfriend of the private detective Varg Veum. Movie will be released this august in Norway.

(Lene Grawford, aka Grunda Pruppen, The Nugget, Lemon, The Babe) is Aqua's female vocalist. She was born on 10th of October 1973 in Tonsberg (Norway). She has one sister called Emilie. Her Dad works as a supervisor for Elf in the North Sea. Her Mum is full-time housewife. She spent her childhood close to nature. Her father made her practice a lots of sports. After college, she went to a guide school.

She is 1,70 m tall and weights 53 kg. She likes her dog, a Boxer called Sara. Her favorite actresses are Juliette Lewis and Marilyn Monroe. Her preferred groups are Kid Rock, Savage Garden and Bloodhound Gang. Her favoured movies are Stargate, Ford Fairlane and The Big Blue. She likes singing, training and travelling. As for her temper, she tells : 'I'm not very patient, impulsive and high tempered'. But she is also full of humour. She defines herself as a feminist. She is against plastic surgery... even if she admits that physical aspect is very important to succeed in her job. She likes futurist cars such as the Smart, but she drives a Wrangler Jeep, a motorcycle, an old BMW and a Jaguar. In a couple of years she would like to liveon a big farm with a lot of animals.

You certainly can't miss Lene. With her outrageousdress sense, huge platform boots, cropped tops and hipsters, and that flaming shock of bright red hair, she out-spices even Geri of the Spice Girls. When she's asked about it, she laughs. 'It isn't real. I've over 30 of them with the same design.' She reckons they bring her luck; since she started wearing them, the band's first international hit, Barbie Girl, has done phenomenally well, earning the band gold and platinum discs all over the world; even in the States. Funnily enough, although Lene's partly responsible for inflicting Barbie Girl on the world, she never even played with Barbie dolls when she was a kid. 'I was a bit of a tomboy and would rather kick a football around,' she says. Tomboy or not, after being a bartender and a goldsmith clerk, her first step towards global fame was becoming a model, although she quickly found out that it wasn't the best job in the world.

'All the bitchiness and competition in the modeling world caught up with me very quickly.' It didn't take her long to decide that there were better jobs to be had in front of the camera; next, she landed a job as a children's television presenter in Norway. It was while she was 'discovered' by René. He heard her sing and was apparently so bowled over by her voice that he asked her if  she would like to sing in the band he had formed with Claus and Soren.  The meeting led not only to Lene joining the band but also a three year relationship with René Dif , which ended some time ago. She's now dating a guy from Denmark although the sudden, astronomical success of Aqua means that life is now megabusy. It also makes it difficult for Lene to see her family, who live near Oslo in Norway, particularly as the band is based in Denmark. 'When I first joined Aqua I had to move to Denmark and was dreadfully homesick,' she told a magazine recently. Lene's live wire performances on stage are legendary - Soren says she metamorphoses when she's performing. 'She's kind and thinks a lot about other people,' he says, 'but she turns into the other Lene when she's on stage.'

2003 : Søren and Lene recently got married in Las Vegas. Lene released her first solo album, called Play With Me, following her first single It's Your Duty. Her follow-up single was entitled Pretty Young Thing.


2005 : Lene and Søren contributed with many other Danish artists to a benefic single to raise funds for the Tsunami victims : Hvor Små Vi Er, released in January.

2006 : Pretty Young Thing was covered by Tina Cousins. Lene decided to move to Hollywood to attend an acting school and start a career of actress. Her Danish was not fluent enough to try a career in Denmark. She gave an exclusive interview in the magazine Costume, about her future plans.

2011 : Lene was announced as one of the coaches on the Danish version of real-TV show The Voice, along with Steen Jørgensen, Sharin Foo and L.O.C.

2015 : she played the role of Velma Von Tussle in Danish version of musical Hairspray.