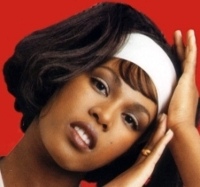 25/07/2009 : Norma Ray 's project Angelux just released a new album entitled Come Into My Life. The sound is mostly house. You can preview and buy it here.

Musical team : P. Maton, Jean Fredenucci, R. Fredenucci. Norma was born on 21st of March 1970 in St Etienne (France). She is 1,73 m tall. According to what she said in an interview, Norma is her real first name (but it was later revealed that it was actually Sylvie). She chose Ray because it was the name of someone in his family. Her father is Frederic N'Doumbe, a professionnal soccer player, who came from Cameroun. He also used to play the guitar. Her mother was from afro-american origin, she worked as an esthaetician. When his parents worked, a Sicilian family took care of her, she considers she had a happy childhood. She travelled a lot : Italy, United States, Great Britain, Spain, Cameroun where she met her father's family. If she hadn't became an artist, she would have liked to be a pilot.

At the age of 18, she decided to stop her studies (she was stuying English, Italian and Spanish) in order to realize her dream, becoming a dancer. Her talent and her perseverance allowed her to work with the greatest choreographists (Redha, Jaime Rogers who did the choreographs of Fame). She danced in Prince's clip U Got The Look, she also danced for David Hasselhof and Johnny Hallyday. She took theatre lessons and appeared in many ads : Reebok, Coca Cola, Barbie and Hollywood chewing gum. She worked as a model with Italian designers, she was Whoopi Goldberg's voice in Sister Act, and a muse in Disney's Hercules. She enters the American School of Modern Music where she studies during 4 years, and finds inspiration for writing and composition in groove and R&B. She writes her song by night.

He first single was released in 1992 under label Ouragan, and was called If It's Love. Norma thanked Yannick Noah singing in the choir. Then came the single I Believe In You.

Her collaboration with Jean Fredenucci begins in 1994 and the first eurodance single to be released was Crazy About U. But later, unfortunatly she changed her style to R&B and French pop, and the single that brought us the biggest success is Tous Les Maux d'Amour (which she co-wrote and co-composed).

1999 : she contributed, with Felixine, to the French musical soundtrack of the Disney movie Hercule. She also took part to French version of songs from the soundtrack of Sister Act 1, Sister Act 2 and King Lion 2.

2000 : her first album Poussières D'étoiles (stardust) was released. It contained 14 tracks, some of them in English... and absolutely no eurodance unfortunately. Her hit Tous Les Maux D'Amour was covered by English pop group S Club 7.

2008 : Norma Ray produced and co-wrote a song with Nicolas Foyer. Entitled Candlelight, it was featured on the soundtrack of the movie The Women. She had already collaborated with him earlier on the project Angelux.

She collaborated to 2 dance-house projects, on with British DJ and producer Andy Ward and another one with German DJ and producer Edmond Dantes. She also took part to a musical cartoon entitled Kalandora. She also works as vocal coach and works on a future album...

Thanks to Marian Stoica