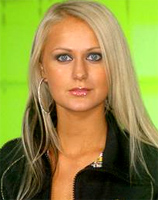 Anna Sara Christina Nordell aka Anorah was born February 19th. When she was 10, she got accepted at "Adolf Fredriks School of music", and for six years she studied music and choir singing, "which I found pretty boring" she explains.

"I had to find ways to sing the kind of music I wanted to sing after school". She was singing with a band, she did drama class and wrote songs on her own. Her family was very much into music then, and they were singing on different occasions pretty much all over Sweden in churches. "By having so much music in my life, it pretty much convinced me that this was what I wanted to spend the rest of my days doing and so far I’ve been able to. That’s something I’m very thankful for" Anna explains.

When she she was 14 years old, she got to play the part of Lisle in the musical "The sound of music" at Göta Lejon Theatre in Stockholm, at the sides of Carola and Tommy Körberg. Anna recalls "I learned so much by doing this, it was so much fun combined with a lot of hard work. (I remember that I was so nervous before entering the stage that I still have nightmares about it !)"

Anna's first written song (she wrote it as she was only 7) was actually released. At the ago of just 15, she was signed to a publishing company and stayed there for about five years. "I wrote songs together with a bunch of talented songwriters from Sweden and also got the opportunity to go to London and write with songwriters there as well. Some of my songs have as a result of this, been translated into other languages like Spanish".

The songwriters Anna worked with needed to present their material to record companies and artists, so they asked her to sing on their demos. "Gradually as a result of this it has ended up being my profession. Now I am singing demos for some of the most successful (if not even the nicest ?) songwriters in Sweden. Sometimes I am a backup singer for other artists too. I think that what I’m most proud of in the sense of backing vocals must be the four songs on the Celine Dion album One Heart. She also did backing vocals for Victoria Beckham, Tata Yough, Dannii Minogue, Fredrik Kempe, Mauro Scocco, GES, and of course E-type. "But what I like most is to sing my own songs for someone who is interested in knowing what I have to say" she reveals.

As she was only 16, she got the chance to go to the US to record the song I’ll Still Love You Then for the soundtrack of the Kevin Costner movie "Message in a bottle". The song was written by producer David Foster who also produced it. "That's something I will never forget. He really knew what he was doing!" she reminds.

Anna is also a voice actor. She is the Swedish voice for some of the animated characters in movies and TV-series.

2004 : Anna released the solo-single Där Finns Du Än The same year, she worked with Finnish band BomFunk MC's, being featured on their single Turn It Up. She did a featuring appearance on the song Drömmer Jag along with Danish band Johnny Deluxe and three Finnish bands, Mighty 44, Beats & Styles (on their song for Finnish eurovision song contest 2006 See The Signs). The song reached the top 5 on the MTV Up North chart.

2005 : Anna did vocals on Random's singles Fly Into The Sky and Miracles. She did backing vocals on Homeless Heart, a track of Amanda Stott's album Chasing The Sky.

2007 : she worked together with E-type again, co-writing songs to his new album Eurotopia. Then she did backing vocals on Da Buzz - Take All My Love.

2009 : she did backing vocals on Marie Serneholt Disconnect Me, then on Malena Ernman's single La Voix, another ESC competitor.

Then she started working with producer Samuel Engh, whom she has written her new album Like He'd Do. "The album has a rock flavor and I am really proud of the sound and the songs :)", Anna explains.

Her hobbies are to spend time with her friends and family. Watching movies, playing World Of Warcraft, shopping, eating candy, travel and have a good time in general! Her family: Mom, Dad in heaven, 6 siblings and soon 10 nieces and nephews. Her favourite colours are pink and black. Her favourite food is Asian, "but everything except celery and liver works for me" she adds. On TV, she likes almost everything. Scrubs, Friends, CSI, Documentaries, Discovery, Jay Leno, MTV and a whole bunch of other shows.

Her favourite expression is "Det är helt sjukt bra! Snabel B. Wohoo!". Favourite words on the way : "Deal with difficult situations as if they were easy and deal with the easy parts in life as if they were difficult."

Thanks to Tavi Meran