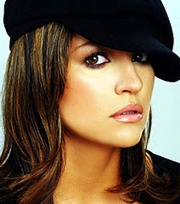 20/09/2014 : Nina Badric's new single is entitled Vjetrenjace. Videoclip was shot on the streets of New York City. She is also planning on releasing her first English-language album soon.

25/05/2012 : Nina Badric performed last evening during Eurovision Song Contest semi-final. She competed for her home country Croatia, but did not qualify for final.

25/02/2012 : Nina Badrić will represent Croatia at this year's Eurovision Song Contest with the song Nebo.

Nina Badrićwas born on 4 July 1972 in Zagreb. She started singing when she was only nine in children's choir Zvjezdice. With that choir she travelled countries, recorded several albums and gained a huge experience in choir, solo and gospel singing.

She started her carreer in her homeland Croatia. Her first single was recorded in 1993 and was entitled Ostavljam Te, produced by Rajko Dujmic and Jasenko Houra. After that, she released two singles produced by Denis Curman : Odlazis Zauvijek and Godine Nestvarne in 1994.

1995 was the year when her first album Godine Nestvarne came out. It also contained the new singles I Ponekad Kada, Da Li Ikada and Take Me Higher. In 1996, she recorded a eurodance single in duet with Croatian female artist Emilia, called Ja Sam Vlak.

After that, the same year, she released the Ja Za Ljubav Necu Moliti : this was her last real eurodance single, after she turned to pop and R'nB. Trebam Te was the name of her new single, from her second album Personality. From this second album came the single I'm So Excited, produced in Austria in 1998. It went #1 in Italy, #2 in Greece, #1 in Croatia, Slovenia, Bosnia & Herzegovina and Macedonia. That single contributed to have Nina known all over Europe. She did concerts in Italy, France, Spain, Greece, Austria, Germany, Suisse, Slovenia, Bosnia & Herzegovina.

Followed the singles Gimme Sunshine with Banditos Bonitos, One And Only with DJ Dado, On And On, Wanna Love Ya Baby and .Riding On A Meteorite with DJ Sonic

In 1999, her third album was released. Unique was a mix of eurodance and pop style. The next single came, once again very succesful : Woman In Love, a cover. The next album was released in Croatia, simply entitled Nina. It contained as well classic eurodance as R'nB. Hit singles in eurodance style were Ako Kazes Da Me Ne Volis and Ostavljam Ti Sve.

2012 : She represented Croatia at this year's Eurovision Song Contest with the song Nebo (a remix from a track of her current album). Afterwards, she did a successful tour in Croatia

No relationship with Nina Gerhart, the voice of The Reason Is You.

Listen to Nina (2) on Radio Euro Classic, the eurodance radio