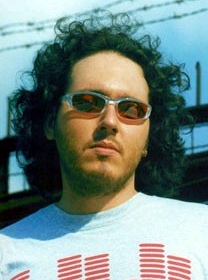 Nicoromano was born in Reggio Emilia, a small town in the North of Italy. Since he was a child he has been very interested in music and he studied piano for about five years. In every children party he put the records on and chose the playlist of the day. When he was 13 he bought his first 2 Technics turntables and mixer at home. Being a teenager, at about 16, he already was an assistant DJ in one of the most important discotheques in Milano : but he was so good that in a few weeks he become the DJ resident !

For many years he worked as a DJ in many famous discotheques in Milano, then in Roma, where he mainly lived and worked. Like many other DJs, Nicoromano had an ambition : to "make" music, not only to "play" it. With the financial support of his family he began to build up his own studio : the "Nicoromano Studio", maybe currently one of the most well-equipped home studios in Italy.

His first instrument was the Ensoniq 16+ : with this only sampler he composed many songs. When the experience grew and the Studio with it, some of the songs he had written and composed when he was 16 became his first releases.

After about 7 years of professional activity, Nicoromano had written and composed over 30 songs. When the team of Masar (musical edition founded by Maurizio Fontana in 1989) started in 1996 the label "Jab" specialized in dance music, the emerging Nico's productions Doomsday, Lisa Jones, Isabel Joy, Break-Even Point and Nicoromano Project were created and licenced abroad in different territories.

In the song Is It You, for the project Break-Even Point, Nico used the powerful performance of Valentina Ducros, while in the single It's A Dream, under the name of Doomsday, he featured the italo-english singer Lisa Jones. He also take a part to Isabel Joy's single named The Love You Promised Me, published in Italy and in Singapore, with two remixes by Beautiful People. With the brand "Nicoromano Project", the roman DJ composed and published Out Of Time : an instrumental disc in progressive-style produced at Nicoromano Studio.

In 1997, under the brand "The House Of Sound", he realized at Nicoromano Study the dance version of the single Ahi Limon Limonero, a funny theme in Spanish-style from the TV-transmission "Macao" (Rai Uno). The song was written from Gianni Boncompagni (director of "Macao") with Morales, Cantabrana, Perello, and sung by two impeccable female vocalists, Stefania Del Prete and Anna Maria Di Marco, with the arrangers Stefano Magnanensi and Stefano Acqua.

In 1999, with the support of beautiful voice of Loredana Maiuri (Italian vocalist from tv-program "Sarabanda"), Nico realized the nice single Happiness, published by Jab/Masar also in Spain, Portugal, Usa and Polonia. Loredana Maiuri appeared under the "spanglish" name of "Majuri", title of the project.

In the spring of 2001, Nicoromano presented Sunflower in the single Rhythm (Funky Bomb). For this project he had already presented Sing A Song in 1999.

He collaborated with Claudio Mangione, the mind behind the "Zhi-vago" project, an half Italian and half German DJ and Producer, with whom he co-produced some songs.

In 2002, he remixed in club-version the super-hit I Feel So Fine for the KMC project, featuring Dhany.

Nico (so he is called from his parents and his friends) is a young man who likes cooking and good eating as well. He adores his cat, called Max. Of course he does love to hear music (every kind of good music) and to make it. He likes very much videogames (maybe his favourite hobby!). He likes watching football, tennis and golf. He practises kickboxing. He likes simple way of living : watching a good movie, eating a good pizza, spending a whole night playing Playstation 2 with his friends... His favourite DJs and Producers are: Fatboy Slim, Paul Van Dyk, DJ Sasha, Armand Van Helden, David Morales, Kruder & Dorfmeister, Chicane, Faithless, Chemical Brothers, Basement Jaxx

Listen to Nicoromano on Radio Euro Classic, the eurodance radio