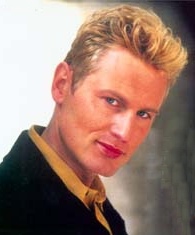 Newton is the stage name of Billy Myers, a former fireman who had to quit his day job because of the sudden international success in the pop/dance scene. Newton has been singing in his hometown Manchester for over nine years, both as solo artist and as frontman to several bands. According to the legend, he was spotted singing in a club and 2 weeks later he was already inside of the studios at Love This (the label from Mike Stock and Matt Aitken) recording his debut single Sky High. The truth is a little bit different, because Sky High was actually made from samples of the original song by band Jigsaw, with the voice of their lead singer Desmond Roy Dyer. This song went Top 10 in Australia, and became a dance classic in many other countries. The single included a Radio Edit, a Hiza Kite Mix, a Kaiser Height Mix and a B-side called Up, Down Round & Round. 2 different videoclips were shot for the song.

However, the lack of career development persuaded him to seek out Dome Records, an independent company from the UK. It was there where Peter Hammond (a legendary PWL mix master) produced his following single, a cover to Dan Hill's Sometimes When We Touch, which sold 35000 units in Australia and reached peak position No. 32 on the UK. Newton has achieved success in almost all the countries where dance and pop music are messed up, like Brazil, Japan, Southeast Asia, South Africa and Thailand.

The album also contained a remake of the Stock-Aitken-Waterman classic Free To Love Again, produced by Pete Hammond, and a cover of Nik Kershaws Oxygen. And to show the softer side of Newton, there were two ballads. One of them, How Long, was written by John McLaughlin and Dave James, who had written hits for UK artists 911 and Michelle Gayle.

The double single Don't Worry was released in 1997. Apart form the radio version, the first CD contained 2 mixes (Paradise Mix and Handbaggers Mix) plus an extended version of Sometimes When We Touch as B-side. The second CD included a Northern Noise Boys Extended Mix, a Tyme NRGMix, a Dreamin' Dub and a B-side entitled All Out of Love. It was very popular in the clubs of Korea.

The same year, Newton released a nice cover version of Boz Scaggs' old classic We're All Alone. All Out of Love was released in 1998. It was a cover version of a song originally sung by Air Supply. Ther were only 2 versions of the song on the CD maxi : Radio Version and Mark Duffy Club Mix. There were also 2 versions of Sweetest Secret (a Pete Hammond radio mix and a Hot Tracks Remix by Steven Tucker), and also a song called Seasons Change.

Then came He Don't Love You Like I Love You, the UK version of this single included no less than 5 different mixes and a B-side entitled Free To Love Again. The Bona Club Mix, House Mix and the Bona Sera Remix were done by John Springate. A Pete Hammond remix of Newton's Love and Affection can be found on compilation Euro 2000

2008 : Newton and his band made of guitarist Matt Hadfield, bassist Dave Lloyd and drummer Pete Akid got signed under U4iA records and recorded songs for his new album Time to Believe which was finally released in 2012. Newton tour in the United Kingdom.

No relationship at all with rave project Newton (Streamline, Wanna Dance All Day).

Listen to Newton on Radio Euro Classic, the eurodance radio