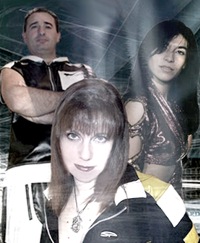 27/07/2019 : New Limit published the sample of their forthcoming new single The Voice, planned for release on August 1st.

29/03/2015 : New Limit are back with a new single entitled The Game, a great track in their usual style. Release is scheduled for April.

Behind New Limit stand the Spanish vocalist and songwriter Amparo Ríos with her 2 brothers Sebastian and Jose who did the studio work. On stage Amparo appeared with dancer Sonia Banuls, and Jose Gimenez to the keyboards. This young Valencian formation saw the light in 1994.

The very first single Smile was released in October 1994. It was produced by Sebastian Ríos, Jose V. Ríos and A. Esteve. It was available in the stores and massively played on radios in 1995. It was featured on the compilation La Ruta Del Bakalao in 1999.

The same year Amparo and Sebastián Rios received the Teddysound prize as the most noticeable author of Dance Music of 1995.

Then came Scream, released one year later. It was produced by F.J. Pascual and M.J. Fernández. The success was important too, therefore they started a national tour. Between 1996 and 1998 they did more than 100 live gigs many important places such as Island Fantasy (Barcelona), Escorpia, Chassis, The Sinia, and many open air concerts in Valencia, Seville, Madrid, Galicia.

In 1996, came the single In My Heart, produced by Sebastian Ríos, Amparo Ríos, F.J. Pascual and M.J. Fernández. It was published under Discoshop Lliria. The same year, New Limit released Lies, produced by Sebastian Ríos and published under N.L. Records, Max Music. Lies appeared on the compilation Maquina Total 9. This year, they won the ZONA Award of best dance act. They also received an award for being the first among the 10 most danced projects on the 26th of May.

In 2002, the single Surround was released. The same year, the record label Contraseña records released a limited edition album that compiled all group's hits together with other productions with Kriss and Yoly and other hits which would be released in the future. This album was for professional deejays only and not for sale.

In 2003, a CD entitled New Limit feat High Density was released. It included the original versions of Scream and In My Heart, as well as 2 singles of High Density called Protection and The End.

Amparo Ríos could have also taken part to a project called Kriss (or Kryss) which is actually the real project behind Strangers (Extranos) and Tonight (Esta Noche), often wrongly attributed to New Limit.

2004 : they did a big tour in which they sung all their hits in memory of the 90s. They started working on a new project including all the new tendencies, without deviating form the spirit of New Limit. In May they released My Destiny under Contraseña Records.

2006 : Smile was remixed by AT (Alberto Tapia) and released under the name AT feat New Limit.

2015 : after The Game, New Limit released a new single entitled Run To Me

2017 : they published a videoclip for the 2k17 remix of their hit Smile