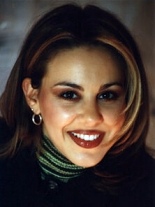 18/10/2008 : Nadia has gone back to her original job of fitness trainer. Discover her official website (thanks to Klems).

Disciplined, open-minded, hard-working, agile, passionate, here is how she was described on her official website. Nadia was born in a family of artists. Nadia trained 24 hours per week for aerobic dance competitions that she had been performing and teaching for several years; she also studied at university in psychology and sociology, trained a group of synchronised swimmers and finds time to devote to her new career. In 1993 she won the Novice National Aerobic Champion title.

Her music has been signed in many countries such as Japan, Asia, Poland, Romania, Mexico, USA, Portugal and the Middle East. Her album Kiss Of Destiny has been released in both Japan and Russia while her singles have been on more than 250 000 albums.

The album was produced by Daniel Bouliane, co-produced by Francois Tessier. It was recorded by Daniel Bouliane & Luc Gregoire, mixed by Luc Gregoire. The songs were recorded & mixed at Onde-Spirale Studio. The guitar on track 6 was by Jose Bergeron, the piano on track 11 by Francois Berube. Back vocals on tracks 2,7 & 12 were done by Pascal Lecoz. Nadia herself also did some additional back vocals. All tracks were arranged by Eric-Jean Baptiste for Premier Muzik Productions at In-Da-Mix Studio, Montreal. It also featured ragga-raper TC (real name: Jason Welch)

Nadia did some TV appearances in Canada, Much Music's show "Electric Circus" and Musique Plus show "Bouge De La".

In 1999 she re-released her album in Japan, it includes Show Me What You Got as bonus track, which was released in Canada in late1998 only on vinyl. The album has two other tracks What's The Problem and the very danceable Your Freedom. Nadia released a new song on a Canadian compilation Le Peep Show feat. Nadia Release Your Soul.

Nadia has come back to her previous job, teaching in the Ottawa/Gatineau region in group fitness and personal training. She is also a certified Reiki Master and a Yanumoja Yoga teacher. She is also the choreographer for "DanceIt International". She founded Studio Lotus.

Listen to Nadia on Radio Euro Classic, the eurodance radio