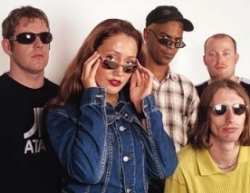 30/01/2020 : Sam Ryder (who already covered the song some time ago) and N-Trance plan to release a reboot of Set You Free on February 2nd

21/06/2014 : N-Trance announced that after summer weeks holidays they would record their new album.

06/02/2013 : N-Trance published on their Soundcloud a preview of their new song Higher without any drum and bass.

02/07/2012 : N-Trance announced that the Freeloaders electro mix of Stayin' Alive, first planned for their Australia tour only, would be getting a digital release as soon as it would be finished.

N-Trance have proved themselves to be one of the biggest UK newcomersin 1995 following immense success with their two releases Set You Free and Stayin'Alive. N-Trance are Dale Longworth and Kevin O'Toole ; back in 1991 they met at a Manchester college whilst studying on a sound engineering course.They decided to form a band which went through a variety of names before ending up with N-Trance.

In late 1991 they came to the attention of some local labels and, aftera little deliberation, plumped for PWL-off shoot 380 Records (now more familiaras Eastern Bloc Records) in January 1992. Following a frustrating year without a commercial release they got out of that deal and eventually signed to AATW (All Around The World) in September 1993.

Their first commercial release was Set You Free (the video cost only £ 5,000) which on this occasion reached the dizzy heights of #82 in the national chart. It was re-released in April '94 when it peaked at #39 - at last a top 40 hit and that was thought to be the end of Set You Free.

Turn Up The Power was brought out in October of the same year and went straight into the national chart at 23. Featuring the superb voice of Loveland vocalist Rachel McFarlane and raps by T1-K, Turn Up The Power really established them as a band who make quality music. It also served to re-awaken interest in Set You Free which was re-released in January of last year. Upon it's third release Set You Free really did fly into the charts, debuting at #6, it eventually peaked at #2 - selling a massive 600 000 units in the UK. It was, in fact, the sixth biggest selling single of the year and elevated them to new heights with success across the world including top 20 status in Europe and Australia.

Having a hit of the proportions of Set You Free did present a problem : the follow-up single really did have to be something special. In N-Trance's case - it was. Stayin' Alive featured Ricardo Da Force - formerly of the KLF. When he heard the demo for Stayin' Alive, Ricardo thought it was a track that he had to do. Upon its release in the UK it debuted at #2 - which gave some indication of how strongly it was anticipated by N-Trance's rapidly expanding fan-base and the general public alike. Internationally, Stayin Alive was one of the biggest UK exports of 1995, reaching #1 in Australia and being top 5 in almost every country of the world.

In November 1995, N-Trance's long awaited debut album, Electronic Pleasure, was finally available. It comprised 12 tracks including all the singles. The album did go a little deeper than just being three or four singles packaged with eight fillers; every track was there on merit.

People have commented on how the three singles released so far were differed from each other - the Euro-style Turn Up The Power, 140 bpm breakbeat Set You Free and the groove of Stayin' Alive. The variation of styles continued on the album, but all tracks had the common theme of being great songs (especially the tracks (Just) Let It Go, Do You Wanna Rock and I Will Take You There). Other artists featured on the album included the multi-talented David Grant and his choir; one of the World's best saxophonist's Snake Davis, the female vocalist Gillian Wisdom and the superb ex-Love Decade vocalist Jerome Stokes.

Their next single was Electronic Pleasure - the title track.Once again featuring the raps of Ricardo Da Force and the vocals of Gillian Wisdom it was another superb euro single, probably their best ever, and an obvious smash to follow the success of the three previous hits. It reached #11 in the UK chart. The video, shot in a freezing cold morgue in a disused mental hospital, featured the band's latest toy, a World War 2 army tank

In 1995 N-Trance also made remix for the single Do You Wanna Party of DJ Scott featuring Lorna B.

In 1997 they were back with a single called D.I.S.C.O. a real disco groove in 90's style (the music reminded a track of the Compagnie Creole but it was originally sung by Ottawan in 1980). The raps were done by Ricardo Da Force. Then came The Mind of the Machine with vocals by Kelly Llorenna, also featuring the Brit actor Steven Berkof, which entered top 20. In September 1997 they released a cover of Do Ya Think I'm Sexy (a cover of Rod Stewart 's hit), a song in the same style and concept as their old cover hit Stayin' Alive. Rod Steward did the vocals himself, duet with Ricardo as rapper.

Later in 1998 N-Trance released a cover of the Guns'n'Roses hit Paradise City (with Ricardo Da Force and Kelly Llorenna). Their last original single so far was called Tears In The Rain (a duet of Kelly Lorenna with Jerome Stokes). They also did a tour in Australia with with rap legends Run DMC

2000 : they released a cover of Michael Jackson's Shake Ya Body (Down On The Ground) featuring the rapper Lee Woolfe and as usual Kelly Llorenna. This would be the last N-Trance single featuring male rap.

In October 2001, N-Trance released a remix of Set You Free : it contained remixes by Rob Searle, Voodoo & Serano, BM Dubs and Tidy Trax.

One year later, they released a Best of album which was hugely successful. Then in September 2002, they released a brand new single featuring the voice of Kelly Llorenna : Forever, which was pretty succesful. The video was shot at Camelaird Shipyard in Birkenhead, inside one of the biggest warehouses in the country

2003 : Destiny was the name of their following single, once again with Kelly Llorenna, it scored another top 40 hit. Produced by Michael Menke (who produced some videos for Scooter), video was shot entirely on location in Mallorca. During 2003 a new studio was built and work began on their third studio album, Nightfall originally planned for spring 2004. The same year, in September, they produced a track for the singer Karen Parry.

2004 : they are back with a new female vocalist, called Gillian Tennant (ex Q-tex vocalist). The new single is entitled I'm In Heaven.

2005 : N-trance producers are behind the project Freeloaders and their single So Much Love To Give. It entered Top 10 in the UK and Top 50 in Germany. Their dancer Lee Limer did a quick appearance in the TV show Never Mind the Buzzcocks.

2006 : On 8th October N-Trance recorded their new single entitled Nothing Lasts Forever. The following moth, they performed it for the first time in Liverpool. It should be released as promo in 2007.

They plan to finish the previously uncompleted album The Mind Of The Machine. They'll probably do a limited run of CDs but will also be available as a download. It will only feature vocals by members of N-Trance between 1996 and 1998. After this has been done they plan to start a new N-Trance album from scratch, and the old songs that we released that weren't on any previous albums won't be included. They explain that album could be a bit darker than usual, and that they are "tempted to go back to their roots and do a big beat piano style album".

2007 : in February, some new tracks were recorded : As The Sun Goes Down, a dance song, and When Tomorrow Comes, a slow romantic song. No date for a new single however...

2008 : N-trance team are the resident DJ for Clubland Ibiza this Summer, so there will be Kelly Llorenna singing in there quite regularly.

2009 : the producers presented the new performers team who will front the project : the new vocalist Lynsey-Jane Barrow joins the former members T-1K and Lee Limer, the original dancer and showman from the infamous stage performances back in the early 90’s.

2010 : N-Trance released a new single entitled Is this Love, featuring their new vocalist Lynsey Jane Barrow. The name of the forthcoming album is Brainstorm. In October Joe Cox, one of their former dancers, passed away.

Listen to N-Trance on Radio Euro Classic, the eurodance radio