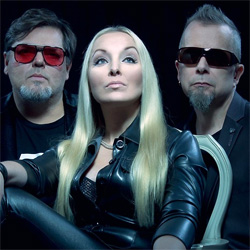 02/03/2019 : New Movetron single is entitled Breathing In. It is the English version of their previous single Uni.

Movetron was founded in 1994 by the Finnish producers Timo Löyvä and Jukka Tanttari and the female singer Päivi Lepistö. They took the controversial decision of writing their songs in Finnish which naturally prevented them to suceed abroad, but at the same time made them very big in their homecountry Finland. Their second and third album sold over 50.000 copies.

In 1999 they released their first track in english Voodoo. Voodoo reminded a lot of songs by Reset and E-type released in this period. Rapper James Black (former 3rd nation member) contributed to the single, which was released both in finnish and in english. After that, Movetron decided to do the rest of the album in english. James moved to London so they chose a new rapper called Chris Sanders to finish the 4th Dimension album. They started a new tour, but after a while there was a feeling to say goodbye to Movetron...

2007 : after 7 years silence, the project's member had a couple of phone calls to each others and after a couple of meetings the 3 original members of the project decided to do re-create Movetron.

2008 : Movetron are back with a brand new single entitled Ei Kenenkään Maa. On 8th February they took part to the semifinals for the finnish Eurovision Song Contest in Tohloppi with a song called Cupido and were selected for the final. But they were unfortunately not selected to represent Finland at Eurovision song contest 2008. In September, a new single called Otanko Askeleen was released, preceeding the new album Ei Kenenkaan Maa.

2009 : in February, Movetron released a new single entitled Filminauha. It was voted by the fans for the 5th single from the current album. Päivi was featured by the radio NRJ project Aamupojat, along with Waldo, and they recorded a single entitled Eurodance. It was released, as promo only, during summer.

2012 : they were featured by Vaida on single Medieval Love. Song participated in to the Lithuenian Eurovision Song Contest qualification in 2012. B-side Jäi Jäljet Hiekkaan was Finnish version of the song.

2016 : they released their new single Nyt On Jatkot.

Thanks to Vision and Sami Kapanen

Listen to Movetron on Radio Euro Classic, the eurodance radio