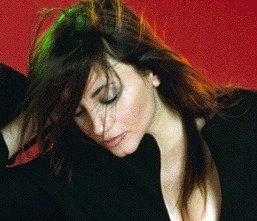 29/04/2012 : For the release of her new single Bambina Brava (from album of the same name), Clara Moroni did an interview with Italian version of Rolling Stones magazine.

11/04/2006 : Pol Campos just opened Claradance, a huge and amazing unofficial website about Clara Moroni. All her contributions and featurings, a lot of sound samples and lyrics, everything is here.

Born in Milano, Italy, Clara Moroni started very young to perform as a singer. She was only 14 when with her first band she performed as an opening act for famous english new wave bands that were touring Italy (such as the Sex Pistols).

Along with a solo career in Italy, where she recordered two albums plus several singles for EMI, and a session career recording vocals for numerous established italian artists, she started to work as a singer, songwriter and producer for the European dance market with labels like, Media, Time, DFC, Energy, DWA and others. For instance, rumors say that she was the real voice of the Antares project. She was also the voice of Copernico - I Believe, Prezioso - Feel The Rhythm, Torricana - My Love and Xeya Kiss Me.

She collaborated with the greatest names of Italo, such as Mauro Farina, G. Spagna. Apart from singing hundreds of records, she can also be heard as a backing vocalist in many tracks. She has also been collaborating with the Italian artist Vasco Rossi since 1996.

Clara's first contact with the Japanese market happened around 1987 when she began to record for SAIFAM with Mauro Farina, singing many of the first Eurobeat smash hits singles. After few years Giacomo Maiolini president of Time records, asked Laurent Newfield and Clara Moroni to create a producing team for his label. The work they did with Time was very successful, and singles like Take A Look In My Heart exploded in Japan thanks also to AVEX who were beginning their astonishingly fast ascent as a record label.

In 1996 Clara joined forces with Laurent Newfield, Andrea Leonardi (aka Bratt Sinclaire) (together with Laurent Gelmetti), and they started their own high energy label Delta Records (Doki Doki, Cherry...). Today this label is one of the most important music sources of Japan, and Clara has only become more popular all over the world.

2004 : Clara released the solo album Ten Worlds, including English songs written during the 10 previous years. She toured with Vasco Rossi during his Buoni o cattivi tour.

2010 : she released a new, self-produced album entitled Bambina brava, recorded with her band 2HOT4. First single from the new album was Io non piango più, a cover of Pink's Who knew.

2012 : Clara released Bambina Brava, a new single from her current album of the same name, along with a video directed by Mauro Russo.