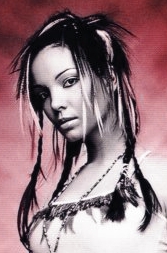 06/05/2002 : Sad news for Missing Heart fans : David Brandes announced that there would not be any other release for this project in the future (thanks to Chris).

Missing Heart is the name of a dance-project managed by the German Producers David Brandes, Felix J. Gauder , and Domenico Labarile. There was a movie called 'Missing' where Jack Raymonds and CC Spencer played leading characters. The theme of the movie was about finding a missing person. Missing Heart implies 'disappeared' or 'lost' but has another connotation like in 'I miss you' which symbolizes a feeling of love. This name suggests mysterious image overlapped with a soft mood of love.

At that time, Lyane Leigh was the project's voice. The debut single was entitled Wild Angels and released in 1994, but the project really started in 1996 with the single Charlene. Since then, the group gained popularity in the European clubs and pop scenes.

The group made the inroads to Japan when the single Moonlight Shadow, a cover of Mike Oldfield's hit (originally written around John Lennon's death), was released in 1997 and was featured in Japanese compilations Dance Mania 7 (1997), and in the Dance Mania Extra (1998) which became the topic of conversations because of the selection of the music pieces was done by popular voting. Lyane should have been the vocalist once again, but she did not have enough time to record the vocals. Instead, the voice of Elke Schlimbach was used. Elke had sung vocals on Fancy's song When Fancy Is Crying. She also worked for Boney M, Claudia Jung, Johnny Logan and some other German projects.

Afterwards, one could have thought it was the end of the promising project. But after some years of silence, a long-awaited album was released in July 2000 under the label Intercord Japan. Entitled Mystery, it features all the previous singles, Wild Angels excepted. E-Rotic's single Queen Of Light also appeared on the album.

The album introduced a new frontlady, Miss Manu Moore. Manu was a member of Felix J. Gauder's project Smiles & More before. They released only one single, called Jet Set Life. Officially, Jeanette Christensen of E-Rotic also did some background vocals. Actually, Manu and Jeanette probably never sung any word on the album. The vocals were all sung by Lydia, who was also E-rotic's studio vocalist at the same period.

The single Tears In May was planned to be the first one to be released in Japan from the brand new album during the month of July 2000. Finally it was released in 2001, in Japan and also in Europe (with 6 different remixes, among them a Talla2XLC remix with the contribution of JD Wood). In December 2000, the track In Aeternum was released in Europe, but under the name of the project Apanachee.

When Felix Gauder created the Novaspace project, he asked David to write a song for the Supernova album. But Felix didn't like the result. So he took Missing Heart's Tears In May instead. Another song that David had written for Novaspace, Journey Into Time, was used for Gracia later.

2002 : Davis Brandes announced that there would not be any other release for Missing Heart in the future. Elke Schlimbach recorded a solo track entitled Niemols em Lävve.

French Eurodance Page
Eurodancehits
Thanks to Chris, Klems and Sascha Busch for the latest informations