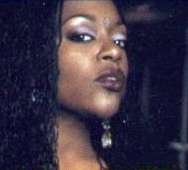 25/03/2010 : Mazelle Kym was featured by Guru Josh and DJ Igor Blaska on the single Eternity

Raised in Gary, Indiana, Kym Mazelle grew up around the corner from one of pop music's reigning dynasties, the Jacksons. While the future success of the entire Jackson family may have already been written in the stars, early interactions with Michael, Janet, Tito, LaToya and the rest also marked Kym Mazelle as a future diva. Unintimidated by the family's star status, Mazelle and the Jacksons would sing songs that the former had written, as they played together. Mazelle's indominable spirit was also evident when her mother would find her singing along with recordings by the queen of soul, herself, Aretha Franklin.

Intially, Mazelle set out to become a diva in the true sense of the word by studying opera at the mundelein college of music in Chicago, Illinois. Disillusioned by a genre that attempts to impose equal discipline upon the spirit as it does upon the voice, Mazelle quickly realized that she would have to take a different path to divadom. Landing a job with DJ International Records, it wasn't long before she met Marshall Jefferson. The two formed a collaboration that resulted in the Mazelle's first two singles, Taste My Love and I'm A Lover, which were released in 1988. It wasn't until her third release, though, that she would receive chart recognition in the United Kingdom. Following the success of Useless (I Don't Need You Now), Mazelle released Wait which sixty-eight spots higher on the charts, to # 7.

Having gained a modicum of recognition, Mazelle began to tour europe, with ten city. live performances that were even more dynamic that her recordings helped to establish a considerable following and Mazelle scored two more hits with Got To Get You Back and Love Strain. with a number of successful singles under her belt, Mazelle released her debut album, Crazy, in 1989. Was That All It Was and a remixed Useless (I Don't Need You Now) spun off from Crazy and established Mazelle and one of house music's favorite divas. a collaboration with soul II soul produced the single Missing You, which appears on their vol. II-1990: A New Decade. writing credits, coupled with dates on soul II soul's world tour, drew even more attention to the talents of this rising star.

In 1991, Mazelle switched from Syncopate Records to EMI'S Parlophone. This moved resulted in the release of her U.S. debut, Brilliant!. featuring remix versions of many of the Crazy songs that had made her name a household word in England, Brilliant! was quick to establish Mazelle similar recognition in the United States. Collaborations with some of America's leading producers such as C+C Music Factory, Steve Hurly and David Morales-helped to establish Mazelle as a global dance diva of renown. Another collaboration, with fellow disco diva Jocelyn Brown , produced the gem No One Can Love You More Than Me.

Mazelle's international status was recognized again with the release of Love Me The Right Way, a collaboration with the Rapino Brother's outfit, Rapination. Reaching number twenty-two in the U.K., Love Me The Right Way was a dancefloor staple through Europe and the United States, the year of its release. 1994 saw a reunion with Jocelyn Brown on cover versions of Barbara Streisand's No More Tears (Enough Is Enough) and ZZ Top's Gimme All Your Lovin. In 1995, Love Me And Leave Me was released, scoring her another hit. the following year, Mazelle was featured on the highly successful soundtrack to 1996's Romeo + Juliet with Young Hearts Run Free. Since then, she has released A Place In My Heart, which perfectly sums up her standing among dance music affecionados. Showing no signs of slowing down, Mazelle has become a constant within the ever-changing landscape of dance music. With distinctive and powerful vocals, mad style and a heart of gold, Kym Mazelle as established herself among the panthaeon of disco divas which includes Gloria Gaynor, Sylvester and Loleatta Holloway.

In 2001, Kym's voice was featured by Infinito for the single Dance Little Dreamer.

In 2004, Kym recorded a brand new studio album The Pleasure Is All Mine, which was a collection of some of her greatest hits, plus some covers of House and Dance Classics remixed in a refined and innovative electro-pop sound by the DJ producer Roberto Intrallazzi and Luca Provera on Stefano Secchi Records. The same year, she released the promo single Don't Bother Me, followed by Love Magic.

2005 : In May she released under her own name the 2005 remixes Motiv8's Searching For The Golden Eye. Lazy Boy featured Kym Mazelle on the single I'm Gonna Getcha.

2010 : in July 2010, she appeared on the BBC Television series, Celebrity MasterChef.

2011 : she headlined Liverpool Pride on August 6th. On November 3rd she headlined Prince Charles's Prince's Trust Ambassador Ball In Glasgow and helped to raise £93,000.00 for the Charity on the night.