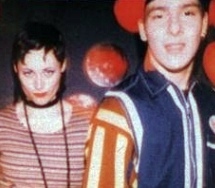 28/10/2017 : Next month, Maxx will release a reloaded version of their hit Get-A-Way, a remixes package including 8 mixes.

12/02/2016 : Maxx Diversity is the name of project created by former Maxx frontlady Elyse G. Rogers (Linda Meek) and Friso Schaap. Discover previews of their live repertoire : some Maxx classics and some new songs.

20/07/2003 : Maxx are currently working on a 2003 remix for their massive hit Get A Way. It could be released in August or September. After that they plan a complete new Maxx record, a single and album in 2004. (thanks to Dance Artist Infos).

Maxx stormed the Eurodance scene in 1994 with two huge hits Get-A-Way and No More (I Can't Stand It). The name Maxx which stands for 'maximum ecstasy' represents the work of  the co-producers The Hitman (David Brunner), Dawhite (no-one else than O'Jay, the rapper and co-producer of Real McCoy), female vocalist Linda Meek, and the rapper Gary Bokoe. The songwriting team was known under name "The Movement", and formed of Jürgen Wind (George Torpey), Frank "Quickmix" Hassas (Dakota O'niel) and Bruce Hammond Earlam. They also had 2 dancers called Emelle and Louise. The hook in their music was a creative mixture of reggae, rap and speed muffin. Maxx was signed on Blow Up (Germany) and their records were licensed under Critique Records.

In one year, Maxx had become one of Germany's most successful musical exports in pop history. The dance floor anthem Get-a-Way ensured that Maxx became a trademark of first-class dance music, almost overnight. It sold more than 400.000 units in Germany alone and reached Gold Status. In whole Europe it sold more than 1.100.000 units. It was # 11 in Israel, # 1 in many French charts and # 5 in UK. The British were so enthusiastic about Maxx that they invited the band to the prestigious TV Show Top of the Pops no less than three times. With 18 million viewers per show, this was a milestone even for the English. There was even a special UK remixes CD contained many unreleased mixes : Naked Eye Extended, Red Jerry Dub and Red JerryMix. On its release, Get-A-Way entered the significant Radio One A Playlist, and remained as the most frequently played single for three weeks. After worldwide Top 10 positions, including Top 5 in Eurocharts Get-A-Way has earned numerous gold discs, paving the way for No More (I Can't Stand It) to join the triumphant Golden March. No More (I Can't Stand It) also reached No. 5 in the Eurocharts, # 5 in Israel, and # 8 in UK. One of its remixes was done by Damage Control. Once again a special UX remixes CD was released, containing a Capri Dub Mix, a Ferrari F1 Mix, and an Overworked Mix. Videoclip wa sshot in Marseille, France.

Linda Meek only came after the first single. Get-A-Way featured vocals by Samira, while Alice Montana (real name : Eliz Yavuz, who would later take part to Zhi-Vago) appeared in the video clip. As for Gary, he always performed with great conviction, presenting his own creation of Ragga/Rap and Speedmuffin which makes the distinctive 'maxxamuffin'. The combination of both these talents and song ideas, along with the skills of great producers working with the most modern of computer and studio technology, all culminated in the making of Maxx.

Worldwide reactions to the debute album To The Maxximum were euphorical. Rather than trying to reproduce the success of the first two singles, it effectively attempted to present a wide musical range of variation and insistent innovation. Despite two massive hits, few people still really knew who or what Maxx was. A mystery which Maxx gleefully enjoyed maintaining. Unfortunately the following singles You Can Get It (even if it reached # 21 in UK) and Move Your Body (a single imitating the Reel to Real style) didn't have the same success. The Christmas single Power Of Love was a very nice eurodance track that could have some success if it had been released not only on the Bravo Dance X-mas compilation. Therefore, after the outstanding 1994 year, this promising, talentful and original group disappeared from the dance music scene. Gary B nowadays lives in Berlin.

2000 : their album track Voodoochild was covered by a project called Flexx (no relationship with the Swedish eurodance group)

2002 : a new album was said to be released in February 2002 by Sony Music in Germany. Entitled Long Time Ago, it contained 14 songs. According to the rumors, it was produced by the Bermann brothers, David Brunner and Gary Bokoe himself. The new album was described as being full of eurodance and europop songs. The new members werre said to be Lilieth Acosta and Dude Spencer. Unfortunately nothing was mentioned on Sony website, for one good reason : this new album was a hoax.

2004 : there were rumors about remixes of the old hits of Maxx that would be released this year. But no company agreed to release them.

2014 : after more than 15 years of silence, Maxx performed in Finland at Club Onniteekki

2017 : Maxx released a reloaded version of their hit Get-A-Way.

2018 : end of June, a new rapper entered the project to perform during concerts and festivals.

Listen to Maxx on Radio Euro Classic, the eurodance radio