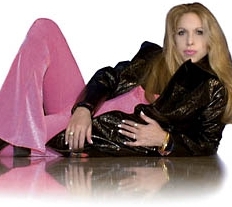 29/06/2000 : Marina is about to release a new album called Under Her Covers, in which she covers some famous singles.

Records company : MRK records. Marina Kamen started dance at 4, added violin and piano at age 7, and then went on to study opera and violin at the prestigious Manhattan School of Music. She pursued a career as a singer/dancer/actress, supplementing her income by teaching aerobics at Body Design By Gilda.

In 1983 she met her partner for life, recording engineer Roy Kamen, at The Music House, a major music/audio production studio in NYC. In 1987 the two launched their own studio, Kamen Entertainment Group, Inc. Over the years, Marina has written, cast, and produced thousands of commercials, often doing voiceovers and jingles for companies including Snicker's Ice Cream, Footlocker, Coty Stetson, Cherry Coke and VH1. This unique opportunity allows Marina to work with some of the best studio musicians, singers, and actors that New York City has to offer. After giving birth to 3 children, she had to lose 100 pounds, and achieved this goal by dancing and fitness training.

Marina is a singer, songwriter, violonist, keyboardist and producer. Her first single Ti Amo was a cover of the famous Italian love song,  released on Valentine's Day 1997. From the writers, Bigazzi & Tozzi, responsible for Laura Brannigan's Gloria, this song comes this eurodance style anthem. Her next single is Do You Want To Dance, the Bobby Freeman hit, with rap from Kraze, who is known for his big hit The Party from the eighties. Then she released the singles The Silent Night and Rocket To Your Heart, which contributed to establish MRK in the world of Europop.

Then followed a 3-title project called The Dream Lover EP, including Marina's Dream Lover, Um-Lotty-Da, and a cover of Jewel's Foolish Games (featuring an extra-special string arrangement 'a la Marina'). The EP was released in late January 1998.

In January 1999 Marina released a single called Sisters Are Doin' It For Themselves, a cover of an Eurythmics song. Finally her debut album entitled Um Lotty Da was released. It contained 12 tracks, 9 MP3 extended tracks and the music video for Stay Away Too Long. Available exclusively online at MRK Records from December 1, 1999 it was released in record stores from January 15, 2000.

In June 2000 Marina released an album in which she covered some famous singles. Entitled Under Her Covers, it was dedicated to all her fans. At the same time, a remixes album was released.

2005 : Marina won People's Choice Podcast Award in Health & Fitness. She has grown her catalog of over 400 songs for fitness and more than 40 albums. She hosts a "high-nrg fitness" cable TV show which airs in various states though out the US

2017 : Marina launched "High-nrg LIVE! - The Musical" that she choreographed and directed.

Listen to Marina on Radio Euro Classic, the eurodance radio