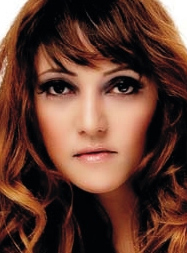 14/12/2018 : Gloria Jones vs Steve Erinle feat. Maloy Tainted Love was released along with a videoclip produced by Jordan Freewood.

16/07/2014 : Maloy's next single will be entitled Party People, it should be released in 2 weeks. She composed it with her brother Anthony and she directed the videoclip.

26/01/2014 : Maloy's current single No Boobs (In This Video) competes in "Unser Song für Dänmark", the preselection to represent Germany at Eurovision Song Contest. You can vote here

14/12/2013 : Maloy's first solo single is a collaboration with Tony L entitled No Boobs (In This Video) and it was released yesterday.

Maria Lucia 'Maloy' Moreno Lozañes was born December 13th 1976 in Manila, Philippines. She not only sings, but also plays the keyboards and drums, dances, and is a composer and songwriter. She comes from a family of musicians. Her dad, Efren Lozañes, is a multi-instrumentalist and vocalist who travelled the world most of the time, and one of her brothers Antonio Lozañes, is a keyboardist.

Maloy had never dreamt of a singing career, even if she took part to singing contests with her brother. She was almost always in the hospital due to her asthma, which did not prevent her from doing good studies. It wasn't until before she finished High School that she thought of pursuing a singing career.

She was a member of the showband XPO and toured the Philippines, Singapore, Malaysia and Indonesia. Her father, who had been living in Germany since the late 1970s with an all-Filipino funk & soul band called Please, decided to get her and her brother, Tony, to join him in 1993.

She did some backing vocals on the project Le Click's album, and contributed to ToyBox Love To The Limit.

In 1999, whe became Captain Jack's new female singer. She did vocals on the singles Dream A Dream, Get Up and Only You, and on the album The Captain's Revenge. In 2000, Maloy left the group.

Maloy appeared on the charity CD Artists Together for Kosovo. She nowadays resides in Büttelborn, Germany.

2007 : another collaboration with Shaun Baker, on the single Power.

2012 : Shaun Baker teamed with Maloy again for his new single There's Nothing I Won't Do, a cover of JX' hit.

Listen to Maloy on Radio Euro Classic, the eurodance radio