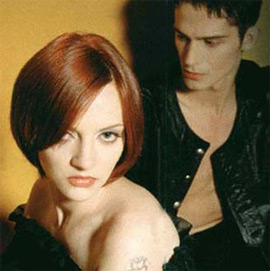 MGK (МГК) was founded in January 1992 by composer Vladimir Kyzylov, guitarist Sergey Gorbatov and Vladimir Malginov. Project's name was made of their last names' letters. They are considered as pioneers of Russian dance and techno

They released their first studio album Rep pod dozhdem (Рэп под дождём, meaning Rap in the Rain) in 1992 under label Soyuz. Then in 1994 came album Bespredel (Беспредел, means anarchie). Legend says that album was released just after a coup in Russia. End of 1994, they scored their first hit with euro-reggae song Indiyskiy Okean, which was featured on a compilation of their label. Vladimir Malginov spent less time with the project since he focused on his wife Nika's carreer.

In 1995, third album Marshrut na Yupiter (Маршрут на Юпитер, meaning road to Jupiter) was out. It was followed by Ostrov lyubvi the next year, under a new records company : Elias records. Album introduced female vocalist Elena Dubrovskaya, who would became the main singer of the project, as well as male singer-dancer Evgeny Marchenko. Before becoming a member of MGK, Elena used to sing for children choir A + B in Ivanovo.

From 1997 and album Russkiy albom, project's style turned to a more pop sound. Album was written by poet Sergei Paradis and almost all songs became hits. In 1998, album Skazhi Da! (Скажи "Да!) was out. A videoclip was shot for song Otkroyu albom. It was followed by Eshcho raz pro lyubov the next year. It contained a few ballads, as well as pop song Zolotaya luna for which a videoclip was shot

2001 : their new album was entitled Zolotyie Tsvety (Золотые цветы, meaning Gold Flowers). Some songs featured singer Mikhail Filippov (who had already contributed as background singer to some songs on the previous album). Some others featured Marina Mamontova, and there was also a duet of Elena Dubrovskaya and Mikhail Filippov (on song Ty Zabyl, Ya pomnyu).

2002 : they released album Gde Teper' Lyubov'?. Elena Dubrovskaya sung only 3 of the album's song. Other songs were performed by Mikhail Filippov or by Yevgenia Bakhareva

2004 : in June they released their new album Lena.

2005 : they released 2 big compilations gathering all their albums

2010 : MGK and their frontlady Elena Dubrovskaya were back on stage.

Listen to MGK on Radio Euro Classic, the eurodance radio