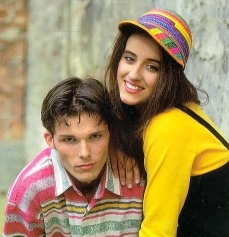 13/10/2010 : A new best of MC Erik and Barbara album entitled 2010 was released. For the moment, the album is only shipped to Czech Republic and Slowakia. For international customers, you can try eBay (Thanks to WebDJs)

The collaboration between the composer and rapper Erik Aresta and the female vocalist Barbara Hascakova begun as they met in Erik's previous group Maduar (which most famous hits were Do It, I Feel Good and Anjel). Their good music and Barbara's beautiful voice immediately attracted attention of the audience.It was promising perspective that had opened to Maduar. However Erik and Barbara decided to leave Maduar and on 4th March 1995 they officially established a new formation : MC Erik & Barbara. Maduar, although without Erik& Barbara, kept its original name consisting of the first letters ofthe group's members (Matyinko, Dulovic, Aresta).

MC Erik a Barbara signed a contract with Polygram for 3 albums till the end of 1997 and released their first single I'm free including the bonus-track Anjel II. The second single U Can't Stopgot to the highest positions in hitlists of several radio stations. In December 1995 MC Erik & Barbara took part in Bratislava Beat Mass inthe Cathedral of St Martin, Bratislava.

Finally, on 4th September the album U Can't Stop was released.It joined the list of the bestsellers and also brought the next hits : a remake of the song Summer Nights from the musical movie Grease, and the only song in Slovak entitled Ked Pride Laska. The video of Summer nights '95 was shot in Tunis. The song was very popularespecially in Estonia and Namibia. Save The Jungle, released February 1996, is the most unusual video they made. Erik and Barbara appear here as very bored astronauts on their journey through deep space and time.

Exactly half year after the album U Can't Stop first release, its reedition with a new cover and four extra tracks was released : Hideaway, LetThe Party Go On, Anjel II (previously released on the singleI'mFree) and When Love Is Calling (English version of Ked PrideLaska). On 11th March the album (with subtitle '96 Version ) was released in whole Europe. Full marketing support was guaranteed by Germany, Belgium, Finland, Switzerland with other countries joining gradually.

This year MC Erik & Barbara took part in the Eurovision Song Contest preselection but were not chosen to represent Slovakia. Marcel Palonder was chosen instead.On 21st March 1996 they went to Moscow, where they gave two performances. Followed a big tour in Czechia and Slovakia. In May they received the SilverOtto prize.

During the summer, Erik and Barbara went back to recording studio to prepare their new album. A pilot single and video entitled It's your day saw the light of the world as first. On 29th September, all the work on the new album was finished and one month later the album named Second was officially released. It was followed by a single which was the coverversion of Abba's famous song Dancing Queen. There is another coversong on the album : Good Vibrations originally sung by the BeachBoys. On this album, Barbara presents three songs she composed together with her brother Andrej. Erik's participation on them was reduced to short rap parts only. One could also hear Erik's solo song I Don't Wanna Lose You he composed for his girlfriend.

On 16th June 1997 they released a video tape entitled Videos And More, featuring the videos of the singles U Can't Stop, Summer Nights'95, Keï Príde Láska, Save The Jungle, Anjel II, It's Your Day, Dancing Queen, Never Gonna and Sen.

The release of the album was followed with a concert tour : 10 performances in Czechia in November and December and 10 performances in Slovakia in February 1997. For the first time they were accompanied by a live band. More recently, the group had a great success in Japan so they got an offer to extend the original contract from three to four albums (just for Japan). There was no album scheduled for 1997 because Erik and Barbara were preparing their own solo projects.


Links to MC Erik and Barbara


More about MC Erik and Barbara

Listen to MC Erik and Barbara on Radio Euro Classic, the eurodance radio