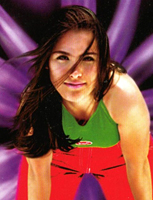 Lynda Aguirre Thomas is a singer, songwriter and producer born on December 21st, 1981, in Tijuana, Baja California, Mexico. She currently resides in the US.

She was first discovered in 1989, as she was only 8, by producers Carlos Lara and Tino Geizer during a singing contest named "Fantasia Musical". However, her parents decided to delay the recording of an album in order to allow their daughter to concentrate on school and to grow a little bit older. So, her first album Lydia was not released until 1996. From that album sprang three songs Gira que gira, Blue Jeans and El amor no tiene edad. Success was immediate. She received an award from a top selling teen magazine ERES (Best New Singer of 1996).

Later on, she went to work on what was to be her third album, retiring from the music scene during 8 months. She only made a brief comeback in early 1999 to participate with other fellow artists in the recording of the song El Pescador. The song was created as an homage to Pope John Paul II during his visit to Mexico in 1999. Meanwhile, she decided to move to Los Angeles, California, where she took English and music lessons.

When Lynda turned 18, she became an activist and participant of several organizations like Greenpeace and Lazos. She had always felt deeply concerned over human rights issues and the constant degradation of the environment. Lynda made use of what fame she had to warn youth about environmental destruction and other global problems.

2000 : Lynda was involved in the production of a telenovela called Primer Amor: A mil por hora. She was hired to perform two musical theme songs for the teen melodrama. The songs were A Mil Por Hora and Laberinto. Then she went back to her fourth album recording.

2001 : the new album Polen was released. It contained 11 songs, most of them written by Lynda herself. The songs Lo Mejor de Mí, Mala Leche, and Para Tí were taken from the album. Afterwards, she decided to make a pause, to continue her studies (English and music) and to write some songs (some of them for other artists, for instance the pop band RBD).

2006 : Lynda wrote the song No pares and she directed the gospel chorus that was part of 4 songs that were included in the collective album Live in Hollywood. She then adopted the artistic name "Lynda Thomas".

Listen to Lynda on Radio Euro Classic, the eurodance radio