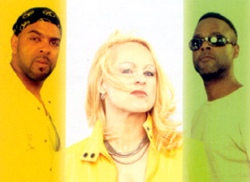 29/10/2016 : Last summer, Loft performed on Panamericana Televisión and in disco Cocos in Lima (Peru) with Gina Mohamed as female vocalist.

03/07/2012 : Loft rappers Courtney and Richard Williams will release a euro-reggae single entitled Love Will Be Forever for July under label Sounds United Records. Including Experience of Music mixes...

16/05/2004 : LOFT are back for good with a brand new single called Still Number One. Apparently the ragga-rapper is still the same but the female vocalist is new. The sound is definitevely ragga, but the B-side We Pray is dance. The exact release date is not known yet.

Born in Kingston, Jamaica, the Williams brothers came to Germany with the US-Army. In Nürnberg they worked at the same time in a small recording studio in which demos for newcoming artists were produced.

All the singles became eurodance classics. The first one was Hold On, which peaked # 8 in Israel. It featured the voices of Kim Sanders and Magdalena Reyes. The texts were written by Nosie Katzmann with C. & R. Williams, the music was composed by Attack II, Giora Schein and Nosie Katzmann. It was recorded in 1993 and released the following year. A remixes single was also released, included a 3-nuts mix and a mix by TNT.

Wake The World, the debut album of Loft, was something very surprising. By the time of its release, there was nothing alike in the market, so innovation was the word. It featured the voice of Gina Mohammed apart from Hold On and Live It Up (which used vocals of Lori Glori).

It was followed by the hits Wake The World (with remixes done by Thorsten Adler, who also co-wrote the track Mad) and Love Is Magic. Even the one which flopped (only # 21 in Israel), Summer Summer Summer, was a great euro-reggae anthem.

Future World was the second album of Loft. Released in 1997, its sound was still great eurodance, fortunately with less reggae influences than the previous one. At this time, LOFT vocalist was not Gina anymore, she had been replaced by Sandra Steinborn. The production team was still done by the Cyborg team , DMP and Nosie Katzmann.

The single tracks, Don't Stop Me Now and It's Raining Again were the best ones (the last one sounded very DJ Bobo-ish since it was written by Axel Breitung and featured vocals by Christiane Eiben).

Afterwards, 2 new singles not featured on the album were released. With Long John Silver they went back to their euro-reggae roots. Their last single, Mallorca, was a homage to one of the most beautiful islands in Europe. It went #1 in Mexico and was even covered by a project called My Orca. Afterwards they decided to make a pause.

1999 : they released a Best Of album including a previously unreleased track : Hang On Sloopy.

2004 : LOFT are back for good with a brand new single called Still Number One. The Courtney brothers were is still a part of the group they created, but the female vocalist was new. They had teamed up with new producers : Andreas Hüging and M. Abbing, and the manager Marino Menichelli. The sound was definitevely ragga, but the B-side We Pray was dance.

Sue, the new vocalist, is also a bassist and composer. In 15 she created her first own band, ThisBadLife, renamed ElectricCircus... The trend was punk. An album had been recorded, and the group even toured. She took part as vocalist to the project Naive in 1997. She released a solo single called Bliss in February 2004.

2005 : the new single was entitled Love Can't Be Wrong. Written and composed by C. and R. Williams along with Andreas Huging, it was licensed under Warner Chappel and contained a B-side called Loft Scratch. An album was planned. The following tracks could be included : Ayaya, Bliss, Close, Free For You, Illuminare, Love Can't Be Wrong, Love In Motion, No More, Scratch, Still Number One, To You, We Pray, Windy Night.

2006 : Sue was featured on Reunion of Dance's first single Rebirth of Tonight

2016 : LOFT performed on Panamericana Televisión and in disco Cocos in Lima (Peru) with Gina Mohamed as female vocalist and a mysterious second rapper called A U Author Untitled.

Listen to Loft on Radio Euro Classic, the eurodance radio