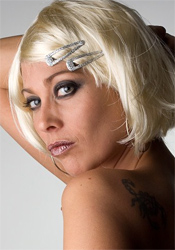 23/01/2019 : Today sees the release of the brand new single from Rexo featuring Sharon May Linn Carousel of Time.

17/10/2014 : Sharon May Linn was featured on Marco Fratty (FPI Project) new single So Spiritual, out today.

22/07/2014 : Sharon May Linn was featured on Fabio Rochembach's forthcoming single I Try, to be released on August 16th under DRUM Records. She also wrote the lyrics.

Sharon May Linn was born in the Netherlands, but has built her career in Italy. She started to sing professionally at the age of 17 as backing vocals first but soon as main vocals in many bands.
She featured in many Italian productions in the 1990's. She also did some of the songs on the Blizzard project. She sang the song Dream for Netzwerk in 1997. Under the alias Sharon S (a production by Fulvio Perniola and Gianni Bini), she released 2 garage singles : Wonderful (a cover of a song originally sung in 1986 by Vivian Lee) and Gimme Your Love. She probably also contributed to the following singles :

In the meantime, Sharon began to develop her creativity by writing lyrics, including, from that time on, the producing aspect of music. For more than a decade, she has been working as a free-style vocalist with a huge number of world known housemusic DJ's, throughout the best clubs.

Back in 2003 Sharon May Linn wrote the song Destination Unknown for Alex Gaudino, it became a hit thanks to vocals by Crystal Waters. A lot of releases came out over the last years: one of her first hits was for sure Lil' Love with the song Little Love.

2007 : she did vocals for Lovematic - I Feel The Love, which was featured on Gomorra moive soundtrack. The same year, she visited Sergio D'angelo & Cucky - Don't Keep Me Hangin On

2008 : Sharon joined FPI Project for their new single So Everybody.

Sharon is a buddhist. Her musical tastes include from house, soul, funky, westcoast, rock, blues and classic symphonies. Her favourite painter is Gustav Klimt She likes eating Italian and Indonesian cooking. She loves cats and owns 2 called Mantra and Tarzan. She has one sister called Melanie.

2017 : she gave her voice to Paolo Bardelli's single Don't Get Impressed.

2018 : she collaborated again with Paolo Bardelli on single The Situation.

2019 : Sharon was featured on Rexo's single Carousel of Time.

Thanks to Marian Stoica, Andrew-FK and Gianni


Links to Sharon May Linn

Sharon May Linn on Myspace
Sharon My Linn on Twitter

Complete your Sharon May Linn collection

More about Sharon May Linn

Listen to Sharon May Linn on Radio Euro Classic, the eurodance radio