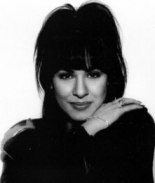 Co-writer for Now And Forever and When I Fall In Love : Alexia Phillips

Lil Suzy's real name is Suzanne Casale and she was born in Brooklyn, New York on the March 1st, 1979. Her career started already when she was 5, when an agent spotted her singing and dancing at Manhattan Beach in Brooklyn. She did renditions of hits by Madonna, Cindy Lauper and a few others and she soon became very popular.

When she was 8 she signed here first record contract. The same year (1987) she appeared on the american show Star Search, although she didn't win it was an acomplishment just to get on the show.

In 1991 her first album Love Can't Wait was released and in 1992, when she was 12, she hade her first hit with Take Me In Your Arms. With this song she got her first gold record and it was Billboards #1 Dance music hit of the year. She also got an award as 1992 Best New Dance Artist. Later in 1992 the second single Falling In Love was released.

The third single to be released was Turn The Beat Around, which is a remake of a classic disco song, and it was followed by her second album called Back To Dance. Suzy didn't like how her second album turned out so when her contract was up she and her parents decided to take control of her career. They started the record label Empress Records and Suzy became the president, which makes her the youngest in the business.

The fourth single out was Promise Me which climbed on the Billboard's Hot 100 Chart. In April 1995 she released her third album, and the first one on her own label, Life Goes On. The fifth single out was Now and Forever. The sixth single out was When I Fall In Love, released in December 1995, which was a pure eurodance track with rap.This single was followed by another single released in

November 1996 called Just Can't Get Over You.

In June 1997 the single Can't Get You Out Of My Mind was released and it was followed by a new album, released in August, called Paradise. Her latest single, which was released in November 1997, is a cover of Netzwerk 's big hit Memories done in freestyle.

In late July, Lil Suzy released I Still Love You, the third single off of her Paradise album. This is her first ballad to be released as a single, but no need to worry, there are plenty of dance mixes. A dance mix was done by none other than Victor Franco. Adam Marano, who produced the original version, has also done a Freestyle/Trip Hop version to satisfy her core fans! An underground House mix was done by Denny Tsettos, who just remixed La Bouche 's You Won't Forget Me. Lil Suzy has also rethe song in Spanish, which is said by many to sound way better than the english version.

In summer of 1998 Lil Suzy signed her first act to her Empress Label. No Shame, a group from Philadelphia, will be releasing their debut single One Night which features the freestyle diva in the fall of 1998.

The fourth single single off the album Paradise called You're The Only One was released on November 23, 1999 (and not in April as it was initially planned)

A Lil Suzy Megamix was released in the winter of 1999/2000 and it included remixes of Take Me In Your Arms, Real Love, Till The End Of Time and much more.

Lil Suzy opened a nail salon on Staten Island October 2nd, 2000. She was very busy for 3 months when she was in school acquiring her nail technician license 5 days a week and doing her shows on the weekends. Meanwhile she said she was currently sorting through some material and waiting for something she absolutely love. Then she would record it.

2007 : Lil' Suzy is pregnant. She recently announced it during a show in Orlando

2012 : in October, she gave birth to her third child, a baby boy called John Vincent.

Thanks to Klems for the latest news