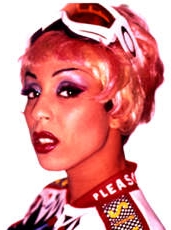 30/08/2017 : Leila K will start a tour called The Fingerprint DJ set. Show will feature Leila as MC, along with a DJ. Leila's artist agency is run by Peter Thelenius from Basic Element.

01/06/2011 : You can read an article about Leila K's new collaboration with Wallenbergs and watch the videoclip. of Legendary. (Thanks to Tavi Meran and Cesar)

06/05/2011 : Leila K is back. She was featured on Petter Wallenberg's new single Legendary, to be released in Sweden on May 30th. It will be included on Wallenberg's forthcoming album Legends (Thanks to Tavi Meran)

Leila K. (Laila El Khalifi) is a swedish pop-star born September 6th 1971 in the suburb Bergsjön of Göteborg in Sweden. Her parents are from Morocco. Her dad, a traditional muslim, worked as a trolley driver. Leila did not really enjoy going to school, so she did whatever she could to get thrown out from classes. As she was 15, her parents got angry at her and sent her to a Moroccian school, but after one year (or 3 years according to others), she was sent back to Sweden where, after running away from home to escape a forced marriage, she hung out on bars and discos.

In 1988, through one of those discos she got aware of a music contest, and entered the competition under the name Ms Melodie. Among the jury of the music contest were the members of Rob'n'Raz, and they liked her music so much that they offered her at music contract, which she accepted.

As a result, Leila K's music career started in 1989, with the huge hitrecord Got To Get, which she performed together with Rob'n'raz. According to Leila K. Got To Get should never have been released, but was released due to a huge demand on radio stations. Other hit singles Leila K. and Rob'n'Raz had together was Rok The Nation, Just Tell Me and It Feels So Right. They also released an album called Rob'n'raz feat. Leila K. Leila also appeared on Dr Alban's Hello Afrika.

In 1990 Leila K. and Rob'n'Raz went on a tour, but after a while she got tired of this collaboration and went on her own to Ibiza, where she was welcomed and treated like a real superstar. She managed to arrange concerts of her own, and on those she earned a lot more money per concert than she ever did as a member of Rob'n'raz. Doing so well she didn't want to go back to Sweden, so she had to be forced home. And once home again all the easy money was spent. Since Leila K. ran away from the tour, Rob'n'Raz didn't want to know anything more about her, so she suddenly was on her own.

Her solo career started in 1991, with the first single Time (it was never released on any album). The single was later followed by Magic Ball, another song that has never been released on an album. In 1992 she was back with the monster hitsingle Open Sesame climbing high on the charts all over Europe (becoming for example # 12 in Israel, and # 12 at MTV Europe). The album Carousel came the next year, followed up with singles such as Check The Dan, Ca Plane Pour Moi (a cover of Plastic Bertrand's hit, which went # 21 in Israel, # 9 MTV Europe), Slow Motion and Close Your Eyes.

Although Leila K. did quite good for some years (in 1993 she was the best selling female artist in Europe, where she was called "the new Neneh Cherry"), she also experienced problems. After the success with Rob'n'Raz, she didn't manage to do just as well on her own and to produce songs popular enough to follow up the success with them. After the Carousel album she experienced some real trouble. In 1994 she earned only about 50.000 SEK (about $7,100) and at the end of the year she owed the swedish tax collectors about 122.000 SEK. She actually got bankrupt! She claimed, however, that the debt of 122.000 was just a mistake.

Leila K. does not (as far as we know) have any education, she does not have a drivers license, her only occupation is as pop star. She is extravagant, loves driving in a limmo and loves to be on stage. She has a most unserious view of life : "life is just a party" as she says in her latest album Manic Panic.

After 2 years of inactivity, she returned in December 1995 with the hit single Electric, featuring choruses by Jessica Folcker which became hot on several dance-charts, reaching #18 in Israel, #8 in Belgium and a top 3 single in Sweden and Finland. In the spring of 1996 the second single came : C'mon Now, which was quite different for her earlier singles by beeing more of a rock-track than a dance-track.

In the early summer 1996 her latest album was released : Manic Panic. Later the same year a new single was released: Rude Boy, with Papa Dee assisting her on the lyrics. Both C'Mon Now and Rude Boy did quite well as singles. The last single from Manic Panic was Blacklisted, but it never became a success. She was nominated for the best album Grammi Award for Manic Panic, but finally Dilba (Dee's sister) won. Swedish newspaper Aftonbladet published a story about Leila K peeing on the floor at the award ceremony, and she filed a lawsuit against them.

From spring of 1997 everything became very quite around her. A reason for that is that she had big trouble finding a producer who would stand by her after she was involved in a serious traffic accident in 1998, and specially after the death of her former producer and friend Denniz PoP in 1999. She suffered from back injuries and had to refuse many offers and collaborations due to these health troubles, for instance a collaboration with the Finnish Boomfunk MC. She won her trial against the Swedish newspaper Aftonbladet.

There has however been a little bit of activity. Late 1998 SVT, a Swedish TV-corporation, made a documentary about Leila K's struggle for stardom, entitled Fuck you, fuck you very much. And in 1999 two singles were released : Open Sesame '99 with new remixes of her most popular hit ever, and Burning Up a cover of an old Madonna-song (from the first Madonna album) together with the group Elephant and Castle. She was also featured on Backyard Babies' single I Love to Roll.

1999 : Daisy Dee has released a cover version of Open Sesame. Leila K appeared as a guest in the videoclip.

2001 : she was interviewed by Fredrik Strage in his book Mikrofonkåt and he drew of her the picture of someone whose drug-dependency had led her to lose control over her life. Later, Leila K accused Strage to have stolen money from her during the interview.

2003 : Leila now lives in the streets, a life far away from the stardom and glamour that surrounded her in the early 90s. She has to steal her food and got sometimes arrested by local police. She had 6 months of rehabilitation at an institution in Skåne. She feels betrayed and exploited by those who made her a star in the first place. She still burns for her music, and that she would love to go back in to a studio. Her family never accepted her choice to become an artist and broke up with her.

A new collection of Leila K's greatest hits was released. The profit of the record release is destined to help the pop-star back to a better life. This brand new compilation contains 3 previously unreleased tracks : Positive Energy, Possessed and Burnin' Up. On the second CD one could find the videos of Open Sesame, Slow Motion, Electric, C'mon Now, Close Your Eyes and Got To Get (feat Rob'n' Raz).

2004 : Leila K's hit Open Sesame was covered by Syndicate of Law and renamed Accelerator. Leila K, now 33 years old, spent 3 monthes in jail but kept on claiming that she wants to go back to music.

In 2005, the Swedish cartoonist Martin Kellerman interviewed her for his own Comic book magazine Rocky.

2007 : on June 15th she did an appearance at a release party in Stockholm in the club Marie Laveau, for the gay blog Bögjävlar, performing the songs Electric and Ça plane pour moi. She is still homeless. 2 days after, she got hit by a car at a traffic light in central Stockholm.

2011 : Leila was featured on Petter Wallenberg's new single Legendary, to be released in Sweden on May 30th. It was included on Wallenberg's forthcoming album Legends

2013 : Petter Wallenberg published "Historien om Leila K", a book about her, without her consent. He told how he tried to record songs with her and develop an hypothesis as to she would suffer from ADD.

2014 : Leila was sentenced to 4 months prison for committing an aggression.