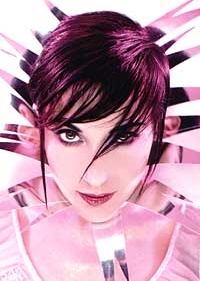 Francesca Messina aka Lady Violet is a real countess. She originates from a Florentine ancient noble race of 600. Her life has always been conditioned by the usual rules and ceremonials of the noble life, but which she has never accepted, because her real nature makes her love freedom, sincerity, passions and transgressions. She has never accepted any sort of restriction, and her impulsive temper has always created several problems between her and her noble familiars and especially with a very traditionalist and conservator uncle.

"I fell in love with dance music when I was really young" Lady Violet tells, "and I always secretly listened to it closed in the bathroom, dancing and doing my make up at the mirror; I wanted to be a singer since then, but I knew that my parents and my uncle in particular would have never approved and supported my choice."

"One night, at my friend’s birthday party I sang a song for him and another boy, who was at the party too, consequently noticed me and asked me if I wanted to sing a song he had been planning for a long time: a remake of a Limahl’s song of the 80s. His way of asking me was between serious and funny, but I immediately accepted with no hesitation anyway. I sang Inside To Outside (cover of a song originally sung by Limahl) and my discographer story began." The idea to give her a little halo of mystery was really born from Lady’s need not to reveal the new life to her familiars (her uncle would exclude her from the family heredity). The name Violet comes from her passion for this flower… As for Lady, her noble origins oblige to a natural elegance in the name as well…

"With Inside To Outside I realised my biggest dream : being a singer and performing on stage dancing and enjoying with the people ! Dance music is the only musical genre which really allows you to easily get in touch and communicate with the audience" Lady Violet says, adding that however her blue blood, she feels as any other normal girl, just wishing to enjoying and living her own life. Unfortunately her traditionalist and conservator uncle recognised her watching a TV show : he was really surprised and angry to see her with a violet wig, so much that he didn't want to speak with her anymore ! But it was too late to stop her, and anyway she did not wish to do. All the success gained with her debut single just gave her more satisfactions and the confirmation that she had to keep on with her own way. After being accredited as one of the best dance acts in her native country, climbing all the charts both of sales and radio, the single, a gold record in Denmark and Sweden, also scored chart positions in France, Belgium and Spain, and is due for UK release by end of September with a special remix. Entering all the international charts, she also appeared on all main music TV shows and dance events across Europe flying from Spain to France, from Belgium to Denmark, Norway and Sweden for all the Summer long!

Taken off her purple wig her success has been confirmed and established with the release of her second single Beautiful World, out Italy in April 2000, and with the participation to one of the most important Italian music TV show : Festvalbar 2000. The European release was scheduled between end of August and September: in Belgium it immediately entered the play lists of the main networks, and in France, it was the highest new entry in the club and sales charts ! In the meantime, it was said that Francesca worked in the studio for recording her first album, planned for release in this Autumn. The album, which would contain songs remixed by Bini & Martini, Triple X, Frank'O Moiraghi, and Clutch, was never released...

Later, it was revealed that vocals on Inside To Outside belonged to Melody Castellari. Inside To Outside had probably been recorded before the project was built around Francesca, because she proved she was also able to sing, since she did vocals on the next singles...

2007 : in November, Inside To Outside was covered by DJ Marco Polo.

2008 : Francesca Messina is nowadays member of a rock band called La Materia Strana that she founded.