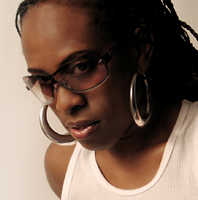 Born Shelly-Ann Jackson, Lady Shelly grew up in Red Hills, St. Andrew (Jamaica) and arrived in Quebec (Canada) in 1992. The following year she began to work with the Unknown Squad, a street hip-hop group which earned their street credits by battling local MCs and performing in talent concerts.

One day while in class at Vanier College Shelly was approached by JD, one of her rival MCs. He was working with Premier Muzik and wanted a female to lay a verse on a track they were producing. Shelly seized the opportunity and finally, instead of just a verse, recorded an entire song : Sweet Party which went #16 in the Canadian dance charts and forced a three year recording deal.

Then came the hit singles Macarena, That's Me, EIEIO and Get It On. She did nationwide tours with top recording dance artists such as Netzwerk, The Outhere Brothers, Reel 2 Reel, Emjay and many others. She was on every dance compilation released at this time in Canada. When home from touring, Shelly could be found at Bull's-Eye studio working with her friend and mentor Bevin Jackson. The two spent hours recording dancehall tracks and learning as much as they can about the music business and general production.

Once her contract expired with Premier Muzik, Lady Shelly felt she needed a break from the music scene and decided to take one by going back home. While in Jamaica, she was encouraged by friends and family members to return to Canada and continue to pursue her dreams. She did return to Canada to learn the music business.

But her need to write, record and perform music was too strong. At around the same time, Gino Olivieri (producer and co-founder of Premier Muzik) was closing a deal with Isba records : a full-length album by Lady Shelly under Isba's label. Without hesitation, Shelly got to work and within no time 15 tracks were recorded and the album was ready for the road. Endurance contained 13 new tracks plus 2001 versions of her hits E.I.E.I.O. and Sweet Party.

By July 2001 the first single from the album, You Know, was certified gold in Canada. Unfortunately, Shelly did not have a good relationship with the record label and wanted out of the deal. With the help of Gino Olivieri her wish was granted.

Then Shelly concentrated on guiding and managing unsigned upcoming artists. But once again her desire to do music surfaced. This time she had decided to do things 100% her way. She teamed up with a Jamaican producer : Garnett "Bobby Culture" Pottinger. The new album God First was completed in only 3 months. The unofficial release date was May 20th, 2005.