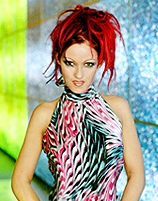 Danii (Daniela Haak) was born in Bremen. Both her parents were Hard Rock artists. Father played in a group called Living Games and never had anything against her to get seriously involved with the music. The only thing he was not very happy about, was the fact that Lady Danii was doing Techno and Dance instead of Rock. Meanwhile he accepted the style she was doing. Father started teaching Lady Danii how to play the guitar when she was 8 years old. They actually now are using the same home studio to record together.

Danii created her first group with a friend called Petra. They created their songs and choreografics, and during the weekends they did some appearances in several shows and contests. Then she started participating in many dance competitions, performing mostly Hip Hop. In one of these competitions, she met Jens Neumann. Somehow she was able to "conquer" his phone number. She tried to convince him to take her to the group. The "lucky" day happened quite soon. One day a singer from Satellite One got sick and need for replacement emerged. That how she got in. She appeared on the singles Enterprise Techno and Young Indy, both singles being released in 1992.

Then she joined Lazy Dee and T Seven to became a member of Mr President. Strangely, her voice can be heard on some tracks of the Mr President albums, but almost never the ones which were released as singles.

In March 1997 she released a solo single as Reset feat Danii, a project produced by Robin Masters and Kai Matthiesen. The song, a very nice and happy euro track, was entitled You Got The Key. Sadly, it did not have the success expected. However, a second single called Egyptian Lover was released.

Danii is not only an artist but also can design clothes. She finished designing school with success, and possesses the diploma. "Already as a child I had much fun to make cloth out of old pieces of everything. I loved to make up sections and organized fashion shows." she explains. When Mr President project was temporarily stopped, she went back to old passion, the fashion design : "I had time left to let my fantasie run free and to bring models to paper". She created in 2000 her own fashion company, Haak Design.

Danii adopted a small dog called Bandit : "The best decision of my life. Until today we both are inseparable."

In 2003 Mr President were officially back : T-Seven had left the group but Danii and Lazy were still there.

Danii got married to former world super middleweight champion, German boxer Markus Beyer. Together, they founded sport training company 12Rounds in October 2004. Markus Beyer died in 2018 as he was only 47.

Nowadays, she lives in Lileinthal and still works a a trainer, security and self-esteem coach for 12Rounds.