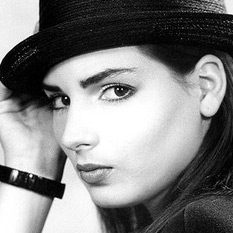 Canadian singer Tiziana N. Kutic aka Tina K. was born and raised in Montreal, Canada to a Croatian father and Italian mother. After having completed a business program and graduating from Lester B. Pearson High School, she studied visual arts at Champlain College. She later went on to study fashion buying and merchandising in New York City at The Tobe-Coburn School and at Lansdowne College in London, England.

Upon her return to Montreal she decided to pursue her lifelong interest in music. She began to write and record songs which led to signing with an independent dance label, Dance Plant Records. Her 2 first singles, All I Wanna Do and Talk to Me were produced by Canadian producer John Brenner. Together, they later released a dance single called Boom Bam under the band name Mannequin. Tiziana also wrote and recorded with Canadian songwriter/producer Jean-Pierre Isaac.

Tina K. wrote and recorded several more songs before pursueing her career in Europe. In 1990 she settled down in Brussels, Belgium where she recorded songs with British actor/musician-producer David Morley for R&S Records. In 1991 they released Seduce Me as an underground club track. That recording led to the first release on Mark Moore's (S'Express) London based label, Splish Records/Rhythm King. Seduce Me was popular in European clubs and played by some of the most famous DJ's worldwide, and remixed by various producers.

In 1992, she went on to sign a publishing deal with EMI Belgium together with her songwriter/producer partner Gery François. After signing to EMI, she signed to Battle Avenue Records as a recording artist and began working with dance producer Koen Tilly, and also with Dominique Sas and Serge Ramaekers of the New Beat band, Confetti's. Her releases included eurodance song Does Anybody Love This Girl (as Kontesa), Kiss Me Deep, and Skies are Blue.

Tina K. returned to New York in 1994 and began recording with avant-garde composer David Shea, whom she later married. She covered the track Initals B.B. (produced by Shea) for the Composer Series: Great Jewish Music: Serge Gainsbourg on John Zorn's label, Tzadik Records. She was later signed by Shep Pettibone to his company, Mastermix Productions. In the late 1990's, Tina K. also recorded with such names as Keith Reid, and Chaz Jankel.