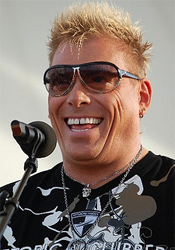 02/06/2018 : Pat Krimson released a new single entitled Belgium Davai (Who Are You), a collaboration with Ricardo Rulando and Serge Ramaekers dedicated to the Red Devils for this summer's World Soccer Championship. It was inspired from his 1998 hit Paranoid in Moscow.

25/06/2017 : 2 Fabiola producer Pat Krimson teamed with Dizkodude and Luke August on single Living for the Weekend.

15/10/2016 : Pat Krimson's forthcoming single will be a collaboration with young DJ and producer Ricardo Rulando entitled Fly with the Eagle and it will be the first record published under his new label Esta Loca.

28/08/2013 : Pat Krimson will be among the candidates at Eurosong 2014, the Belgian preselection for Eurovision Song Contest. He will probably compete as a producer, but not with 2 Fabiola. Former member Loredana recently took part to The Voice of Flanders, and Viola is pregnant. This is not the first time in Eurosong, since Pat had already competed in 1993 with his pop project Leopold 3. More infos

Belgian musician and composer Patrick Claesen aka Pat Krimson was born in 1966 in the Belgian region of Limburg. He started his carreer in the mid 80s. In 1988 he was hired as promotion boy at Antler-Subway Records in Aarschot. At that time nobody could have dreamed that this man from Limburg would become one of the driving forces behind this company. On the one hand he set up a succesful record label Dance Opera, which soon became one of the most popular labels thanks to hits like Time Modulator, Flashing and Fly Tox. On the other hand he founded the popular Flemish band Leopold 3, with whom he reaches the zenith of fame in Belgium.

Then he created succesful eurodance project 2 Fabiola (still an homage to Belgian monarchy). He founded the labels Dance Opera, Circus and Atmoz. Atmoz was also the name of 2 clubs he opened in Hasselt and Turnhout.

In 2000, he left Belgium with his wife Ann Vervoort (former Milk Inc frontlady). Together, they established the label Benimusa in Ibiza.

2008 : Pat was back on stage with his project 2 Fabiola, along with 2 new female vocalists. The same year, he released his single Colors (United In Ibiza) featuring Ideley.

2009 : new Pat Krimson single was entitled The Rush Of My Life, featuring vocals by Sue Price.