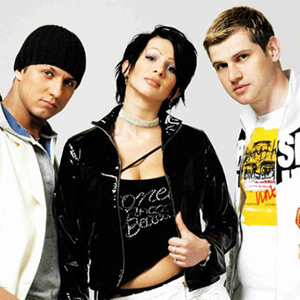 Their albums were known under their title as well as their colors (hence the project's name). First album Starshiy brat (Старший брат - meaning big brother in Russian) was also called "yellow album". It was released in 2002 under Iceberg Music. It was first presented in Minsk in 2001 under title Ty uzhe vzroslyy (Ты уже взрослый, a phrase which appeared in the lyrics of song Starshiy brat). It was elected as one of the most remarkable and memorable pop successes in Russia of 1991-2001 by magazine Aficha. Oksana married producer Alexei in July and gave birth to their child Vladimir in August. Kraski did a tour in 2001-2002 which lead them through Belarus for not less than 172 concerts. An unofficiel/fake best of entitled Zolotyye Khity - The Best Of The World was released under NMI Records.

Then in 2003 they decided to focus on Russian musical market, releasing following (red) album Ya Lyublyu Tebya, Sergey!. There was a first version with 12 tracks, then a reissue with 8 bonus tracks (among them, song Ty U Menya Odna which was a duet with boys band Yak-40 originally recorded in 2001).

Kraski started having trouble with Belarus authorities, and in April, their office was searched by the police, who even arrested some employees. Project had to fled to Moscow. They were joined by keyboardst Dmitry Orlovsky, while dancer Olga Guseva left the project, as well as Vasily Bogomya and Andrey Chigir. Album Oranzhevoye Solntse was released in 2003 too. It included a few new songs as well as remixes of their previous hits. An unofficial album entitled Ty U Menya Odna (Ты у меня одна) was also released the same year, under Star Factory. It included some "new" songs (Mama Ya Bol'na, Chto Zhe Ty Lyubov' Tak Daleko, Zvezda, Odna) as well as some tracks from the yellow and red albums.

Then came Vesna (Весна) aka the blue album and Te, Kto Lyubit (Те, Кто Любит) aka purple album in 2004. In 2004 too, an unofficial compilation called Best 2004 was released.

In 2005-2006, the project toured all over the world. In 2006, singer Ekaterina Sasha joined the project. Oksana settled in the United States. Meanwhile, some fake Kraski project performed their songs illegally.

2007 : after a pause, Oksana started to produce her own solo album. She gave birth to her second son called Alex.

In 2009, a green album without Oksana, the Zelenyy albom (Зеленый альбом) was released under label Monolit and featuring Marina Kireeva. It was actually a fake released by a project using illegally the name Kraski.

In 2010, rumors said that Kraski officially split. However, on the project's official blog, one could read that Alexei Voronov and former member Olya Guseva were about to record an album together and that project was tourning in discos with Ekaterina Sasha.

2012 : end of July, Marina was abduced in St Petersburg, but rescued by the police and kidnapper was arrested. Meanwhile, Oksana went on her solo carreer, releasing many records between 2012 and 2013. She was also invited to perform Kraski songs in 90s festivals. In December, Alexei and Marina went to Hollywood to record some new songs.

2013 : in March, they announced a Zelenyy albom by the real Kraski project was planned. But in September, its release was postponed because their heavy touring schedule did not leave them enough time for the album. There was a legal fight between Oksana and Alexey on the songs' rights. Alexey wrote a book, promising revelations about the project's story.

2015 : in October, Marina left the project to be replaced by Daria Subbotina.

2018 : in April, Oksana Kovalevskaya came back to front Kraski. Alexey Voronov is still fighting against fake projects which are performing under name Kraski without authorization. They sued Marina Kireeva who recorded the fake green album.