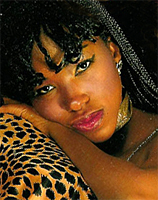 Jazmine (aka Jazmine Katrina) was born in Long Island, NY (USA) from Cuban parents. Putting her studies on hold for a while, Jazmine sang in several amateur contests in Florida with overwhelming success. This how she got spotted by Jake Hyytia, from Panther Enterprises, who became her her manager and producer. Together they decided to start her career in Europe. They spent one year preparing her show and seeking composers to collaborate with.

Love Like Never Before was released in Finland under the label K-tel and licensed in Germany under Shift Music. It went # 1 in France Top dance chart for two weeks. It remained on the chart for 21 weeks, from which 14 weeks were in the Top 10. Then came With Or Without You, licensed in France under Ascot (Atoll), which included a remix by Optical II.

The follow-up single was entitled Woman In Love (a cover of Barbra Streisand). It stayed in the Nokia Eurohit Parade Top 10 for 8 weeks with the best position #4. It was the first non-Finnish-language-song that stayed more than one week in "Finland Is Dancing To This"-chart (best position was #15). It also stayed 6 weeks in Finland Radio Top 20 with the best position #12. A videoclip directed by Erkki Niemenmaa was shot for this song.

Her debut album Nightfall was released under K-tel.

She began her tour around European discos and clubs with immediate success. Jazmine's performances have included hundreds of nightclubs, several European Summer Festivals, radio and TV appearances. She has also performed many times in different Cruise Lines in Europe. The last one was Jazmine's Christmas Show, on MS Silja Festival between Finland and Sweden.

1998 : Jazmine made her debut to the Latin-American community by participating in the TV show, Sueños De Fama, on Telemundo. She sung in 8 episodes in the show, which aired on worldwide starting late 1998.

2001 : Jazmine appeared on the WB network real-TV show PopStars in January. She also made her first appearance as a "Whitney Houston" impersonator on the TV show Your Big Break, which aired nationwide from November 2000 thru August 2001.She subsequently performed in several corporate events.

2007 : For the past 6 years, Jazmine has been performing as a Whitney Houston "Look-and-Sound-a-Like" for Legends in Concert in their venues around the world, including Japan and the United States.

Listen to Jazmine on Radio Euro Classic, the eurodance radio