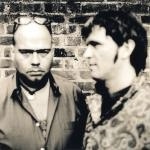 12/02/2015 : Jam el Mar announced on his Facebook account that Jam and Spoon would soon release some 2015 remixes of their hit Find Me.

Jam & Spoon, a dance/techno project from Frankfurt/Germany, is a collaboration of Jam El Mar and Mark Spoon. In 1992 Jam & Spoon released their first EP named Tales From A Danceographic Ocean, containing the massive European club hit Stella. A bit later their remix The Age Of Love became a classic and one of the best sold remixes in techno history.

After this the double album Tripomatic Fairytales 2001 & 2002 and the single Right In The Night (based on a music of the classical compositor Isaac Albiniz, and featuring Plavka's voice singing lyrics by Nosie Katzmann) entered the charts world-wide in 1993. It reached # 10 in Israel and also # 10 in the UK for the 1995 re-release. In August it was in the Top 3 of the US Club play chart for the second week. Plavka undertook an extended promotional trip to Canada, playing live on Electronic Circus, Canada's biggest music TV show. In Autumn 1994, Plavka toured through Italy, Finland, Germany and Lithuania, performed in France on Dance Machine in front of 17,000 people.

In November-December, the group was nominated for Best European Dance Act at the first ever made MTV Europe Awards.

In the same style came Angel in 1995, which was # 16 in Israel, and entered top 40 in UK. The very violent video was broadcast censored on MTV and uncensored on VIVA but not in high rotation anyway.

The following singles were unfortunately very far from Eurodance. El Baile (which means "the dance") is a kind of progressive dreamhouse track, with Spanish vocals.

More recently they realeased a single in collaboration with Giorgio Morodor : The Chase.

Jam & Spoon are also behind 2 other big projects. The first was Tokyo Ghetto Pussy in 1995 who released many tracks such as the big hit I Kiss Your Lips and an album entitled Disco 2001. Later in 1998 they created the project Storm. Their first single, also called Storm, was a clubhit in Europe. In 2000 Storm knew succes again with the big hit Time To Burn. Their latest release is entitled Storm Animal. In the video of the single you can see Jam & Spoon themselves a few times. They released an album entitled StormJunkie. They also made a new version of their classic anthem Storm.

Beneath their own releases Jam & Spoon are also well known for their remixes for artists like Dr Alban, Quincy Jones, Moby, Enigma, Frankie Goes To Hollywood, Pet Shop Boys, Yello, New, Order, Queen, Simple Minds and many, many others. In 1994 they received the 'best remixers of the year' award from the UK Mixmag magazine.

2001 : Jam & Spoon are back : the song Be Angeled will be released on April 30th. It was as usual written by Nosie Katzmann.

2003 : Jam & Spoon will release their new single Cynical Heart in December. It features the voice of ex Simple Minds singer Jim Kerr and unfortunately it's not eurodance.

Next single announced was entitled Set Me Free (feat. Rea). Set Me Free was used in the original motion soundtrack of the movie Lautlos. In September, the new Jam & Spoon single was out. Entitled Butterfly Sign, it featured the voice of Plavka, back again... It entered the German charts at #67 and the German official dance chart at #40, and went #2 in Czech Republic.

2006 - On the 11th January, Mark Spoon was found dead in his apartment. The cause of death is assumed to be a heart attack, closer circumstances are unknown. New from Jam & Spoon, a double album entitled Remixes And Club Classics.

2008 - Right In The Night was covered by Whigfield.

Other tracks released by the Jam and Spoon team :

© 1995 - 1999 by Stefan Sell
Dance Artist Infos
Thanks to J.J.H. Verkroost, Kizoo and Denis "DJ Hooligan" Zhabkin for some informations
Thanks to Shimon O'Hana for the charts positions


Links to Jam and Spoon

Complete your Jam and Spoon collection


More about Jam and Spoon