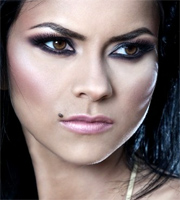 13/09/2020 : New from Inna a collaboration with Farina entitled Read My Lips. She also took part to TV show Masked Singer România on ProTV.

23/07/2020 : Today, Inna and Minelli released a new single entitled Discoteka. Video was directed by Bogdan Paun (Thanks to Tavi Meran)

06/05/2020 : The videoclip for Inna's current single Not My Baby was directed by Bogdan Paun

Elena Alexandra Apostoleanu aka Inna was born October 16th, 1986 in Neptun near Mangalia (Romania), on the Black Sea. Her love for music was first encouraged and supported by her family. Her grandmother and mother were both occasional singers at local parties or night clubs. She took bel canto lessons with master Traian Broască. As a student, she attended classes at the Mangalia Economical Lyceu then attempted a degree in Political Sciences at the Ovidius University of Constanţa. Before turning 18, she auditioned to join the nationwide famous pop group A.S.I.A. but she was rejected in favor of soloist Alina Diana Crișan. Discouraged, she started a career as a household retailer at a small boutique in Neptun. In late 2007, producer Marcel Botezan came across to Inna while singing in the market and, impressed by her vocal ability, he proposed her a contract with Roton. She took the stage name Alessandra and recorded 2 pop-rock ballads (Goodbye and Sorry) produced by Romanian dance music producers trio Play & Win (Radu Bolfea, Sebastian Barac and Marcel Botezan). The songs competed to represent Romania in the Eurovision Song Contest 2008, but none was selected. She then changed her stage name to Inna and her producers decided to opt for house/dance style.

On November 12, 2008, she released her debut single Hot. The single went #5 in Romanian charts, then became an airplay success worldwide. Two videos were made for this song. Her second single Love was released on March 12th, 2009 and did even better, peaking at #4 on the Romanian Hot 100 in April 2009. It was was completed by a video shot in slow motion. Third single Déjà Vu, a collaboration with Romanian DJ and producer Bob Taylor, also smashed the music charts : it went #7 in her home country, and was also a major hit in Russia and Hungary. In the end of June, Inna won a special jury Romanian Top Hits Award for her top 5 hit Love. The same summer, Hot went #1 in Moldova, Bulgaria, Lebanon, Malta, Poland, Spain, Turkey, Russia, Hungary and Greece, sold over 40,000 copies and was eventually certified Platinum.

On August 6, 2009, Inna released her fourth single Amazing , a song originally recorded by Anca Badiu. The song went #1 in Romania and Bulgaria and at #3 in Russia, and entered the charts Europewide. On November 5, 2009 in Berlin, Germany, Inna won the MTV Europe Music Award for Best Romanian Act. In Romania, at the end of 2009, Inna was named the "Woman of The Year" during the Young Talents Awards.

At the beginning of 2010, Hot peaked at #1 on the Billboard's Hot Dance Airplay chart and the UK Dance Chart. To support the Romanian release of her debut album Hot in March 2010, she released a fifth single entitled 10 Minutes without a music video. It only peaked at #18. For its international release a video was shot in London (England), directed by Paul Boyd. A deluxe version of the album was released in France and Spain (the French edition is entitled Very Hot).

At the 2010 Romanian Music Awards, Inna won the awards for Best Female, Best Album, Best Show, Best Web Site and Best International Artist, and performed her Romanian number one single Amazing, as well as her sixth single Sun Is Up. Sun Is Up won the EurodanceWeb Awards and went #1 Bulgaria and was top 3 in Turkey, France, Romania, Russia, and Switzerland. The music video was shot on August 24, 2010 in Marbella, Spain. It was directed by Alex Herron. The next single Un Momento, featuring Spanish DJ Juan Magan, charted in Spain and Romania. Inna started her European concert tour "INNA en Concert" in June 2011, with additional dates in North America and Mexico.

In 2011, Inna released the second album I Am The Club Rocker. 2 more singles were spawned by the album : title song Club Rocker (the name she gives to her fans) featuring American rapper Flo Rida, and Endless. None of the songs was a hit.

2012 : Inna embarked in her second world tour, the I Am the Club Rocker Tour on January 13. Between April and May she released not less than 4 new singles : WOW, Caliente, OK and Alright. Then came Crazy Sexy Wild (English version of Tu Si Eu). She supports association Bring The Sun In My Life to help women victims of domestic violence.

2013 : Inna's new single was More Than Friends, written and produced by the usual Play & Win team. She was also featured on Spanish DJ Brian Cross's new single Boom Boom. Her third abum Party Never Ends was scheduled for release Spring 2013 and it included a cover of La Bouche's hit Be My Lover. In November, title of next album was revealed : Yo Soy latINNA

2014 : In April, Inna, Alexandra Stan and Daddy Yankee recorded song We Wanna. In May, she was featured on 3 Sud Est's current single Mai Stai. In June, she did vocals on Romanian rapper's Puya's new single Striga!. In September she released an EP entitled Summer Days. In November, her new single Diggy Down was out. In December, Inna was featured on Morandi's song Summer In December. Album Yo Soy latINNA was postponed once again...

2015 : in July, she released her new single Bop Bop featuring Eric Turner. Her album Body and the Sun (including the songs published the previous year on Summer Days EP) was released in Japan. Another album, simply entitled Inna, is planned October 15th.