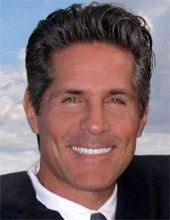 01/11/2016 : Discover a preview of Tom Hooker's forthcoming single Tell Me. Video release is planned next week.

His family moved to Europe when he was only six months old. At the age of 10, he started his musical career as a drummer. At 13, he created his first band. At 15, he first appeared in public at a concert as a drummer/singer. He studied languages in Switzerland.

In 1980, he moved to Italy, where he was discovered by Italian producers Roberto Turatti and Miki Chiregato. His first hit was Flip Over, b/w the track We Can Start It All Over Again. He had his first major success in 1986 with Looking for Love. The same year, he released Swiss boy under the scene name Lou Sern. He co-wrote (under the name T. Beecher) and sang lead vocals on the first two Den Harrow albums.

By 1988, he moved to photography and his music style changed with his single No More Heaven. His last single was Run Away, a nice eurodance track released under One Way records and licensed in Germany under ZYX, which was unfortunately a commercial failure. During the 90s, he did some English vocal coaching, advising artists such as Spagna.

In 1994, Hooker left the music scene to move to America to marry Suzanne Berquist. He settled in Los Angeles and changed his name to Thomas Barbey, his mother's maiden name. He began a career as a visual artist, creating surreal photographs, called photomontage. He currently exhibits in galleries in many countries around the world. "I'm retired and I'm rich. I know it may sound strange to you but I was also doing it for the money. It was just a job. A very fun one at times" he explained in an interview.

2010 : In October, he collaborated with his longtime musical colleague and fellow composer, Miki Chieregato, to produce and release a brand new single and video, Change Your Mind. Miki and him published a video in 3 languages to prove that he was the real singer on Future Brain, accusing Den Harrow to have written threats against him and his family. Afterwards, Den Harrow recorded a filmed answer in Italian...

2011 : he released a new recording and music video of the Den Harrow track Future Brain, which featured himself. The same year, Miki and Tom released the single No Elevation.