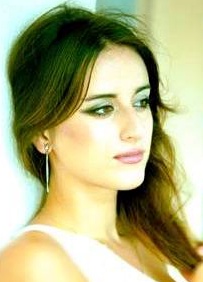 Barbara Hačáková was born on 11th of December 1979 in Koice. Very soon she was attracted by music and had a gift for it, so she started learning the piano and singing. This is how Barbara describes her relation to music : 'It comes from somewhere from inside me. I express my joy and sorrow by music, by my own compositions, by singing and dancing and playing the piano. I can not imagine my life without music. Each kind of music evokes some response. It either gives me an energy or brings me down. The music can make me happy too. When I was four years old I couldn't understand why people spoke to express themselves. It's a strange thing, but I prefer selfexpressing by singing. I couldn't find anything nice in the spoken language, it's without melody. That's why I everything set to music. I can not live without music.'

When she was about 12, she took part in 'Mini-Playback-Show' competition where she imitated her pop-idols Michael Jackson, Madonna and 4 Non-Blondes. Later she also performed at the 'Talent show'. At that time, people started to talk about this young singer with her incredibly crystal voice. She began to sing at the Kosice Jazz Club songs by Jackson, Madonna, Mariah Carey, Whitney Houston and especially Queen.

The breakthrough in her career (and private life too) came in February 1994 when she was asked to sing high vocals for the song Par Bielych Ruzi by the group Maduar, where Erik was already a member. They liked her voice and therefore Barbara was featured on other songs of the group.

Inspite the great success of the album I Feel Good, Erik and Barbara decided to leave Maduar and establish a new formation. They named it MC Erik & Barbara . She got much more place for her and she could take part in making of the whole new album U Can't Stop as her voice appeared in each song of the album. The success of their first project was immediately followed by many concerts, live performances, making videos etc. Being busy, Barbara had to interrupt her studies at a Secondary School (second class) and continue to study according to an individual studying plan. In October 1996 she spent two weeks in England to improve her English. In 1997 she attended the fourth class of grammar school.

While working with the group, sha also cared about her solo-carrer. Se released a song entitled Laska Drz Ma Nad Hladinou and she was also featured on the song Usmev (Smile) and on the Duro Cierny & Company project Cierny Kvet (Black flower). On October 20th, 1997 she released her solo album which was more popstyle-like. There were also some film offers made to her. But the fame did not spoil her and she is the same kind and modest girl. In her free time she like to meet her friends and play basketball.

The same year, she recorded a soundtrack for the movie Fountain for Suzanne and for the main part of the Musical "Mary Stuart".

In 1999, Barabara finished her second solo album Ver, Ze Ja, ("Believe in me") under Universal Records, Slovakia. After completing her contract requirements with Universal Records she arrived in the United States in December of that year as a permanent resident of Florida.

Barbara's father is an academic painter and her mother (who worked as a sound engineer at the Slovak TV and later worked for an international magazine) now cares for her daughter's careeroui and accompanies her on her tours. Barbara's 4 years older brother is following his father and studies design at the University.

2002 : Barbara is now very busy with her solo carreer.