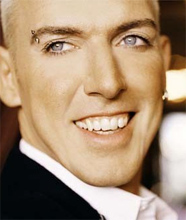 25/12/2016 : HP Baxxter will be again member of DSDS jury, along with Dieter Bohlen, Shirin David, and Michelle.

24/01/2016 : HP Baxxter is one of the 4 jury members in real-TV casting-show DSDS 2016, long with Vanessa Mai, schlager singer Michelle and as usual Dieter Bohlen. First show aired on January 2nd.

07/11/2012 : HP Baxxter appears in a documentary movie about the comeback of fictive 80s project Fraktus (a creation of Studio Braun), described as techno pioneers. Out in German theatres on November 8th. For more credibility, movie will be followed by a videoclip (featuring Alex C's former vocalist Yasmin K), an album, and even a tour.

H.P. Baxxter (real name Hans Peter Geerdes) was born on March 16th 1966 in Leer (Germany). He studied law for one semester, but he ultimately completed an apprenticeship as a wholesale and foreign trade buyer. Then he moved to Hannover to make music... In 1986, he founded the band Celebrate the Nun, together with his friend Rick J. Jordan (real name : Hendrik Stedler) and HP's sister Britt Maxime. They split in 1991, and HP found a job in Edel records A&R department where he met Jens Thele.

In 1993, HP, Rick, Jens and Ferris Bueller (H.P.'s cousin), started the remix team The Loop which had its own Loop! D.C. Studio in Hamburg. They also founded Scooter... With over 20 top-ten hits, they became the most successful single-record German acts.

2004 : he split with his girlfriend Lital Hoch.

2006 : on May 6th 2006, he married his girlfriend Simone Mostert (his second wife). He was jury member of Viva's casting show Hot Or Not.

2007 : In December, HP Baxter co-presented The Dome 40 and Scooter performed Behind The Cow.

2009 : on July 30th, during the video shoot of J'adore Hardcore in Mallorca, H P Baxxter was almost a victim of a car bomb attack. According to Michael Simon, HP went to report a theft to the police. When the police sent him away to find a translator from German to Spanish, Baxxter left, and within minutes the bomb exploded.
Together with with other German artists Jeanette Biedermann, Tobias Künzel (from Die Prinzen), Guildo Horn and Sylvia Kollek, HP was a member of the German national jury of Eurovision Song contest in Moscow.

2011 : HP and Simone got divorced, on the morning of The Stadium Techno Inferno...

HP is 1,88m tall. He is also known under various nicknames : Candyman, Sheffield Dave, Screaming Lord, Ice, Chicks Terminator... He owns and collects many old British cars. Baxxter has stated that he is a fan of the United Kingdom, and the people of the U.K. "Find out what you are unable to do and then go and do it!" is one of H.P.’s favourite quotes.