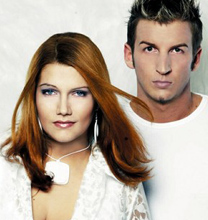 20/11/2017 : Groove Coverage are back with a new single entitled Wake Up. Video was produced by: suprime:pictures

09/05/2015 : Groove Coverage's single is a renewed version of Million Tears, originally a track of their first album Cover Girl.

18/12/2014 : Groove Coverage's new single is entitled Wait and it will be out tomorrow. Videoclip was produced by suprime:pictures (Axel Konrad and Ole Wierk)

29/01/2014 : Discover the videoclip of Groove Coverage's forthcoming single Tell Me. Produced by Suprime Pictures, it was directed by Patrick Frey and Axel Konrad.

Groove Coverage are DJ Novus, Axel Konrad and the vocalists Verena and Mell

In cooperation with Suprime Music Ingolstadt the project Groove Coverage was founded overnight by DJ Novus (Markus Schaffarzyk) and Axel Konrad in Summer 2001. Supported by his both producers Axel Konrad and Ole Wierk even the debut single entered the Top 20 of the Dance/Clubcharts. Probably Are U Ready should have been a sign at that time, because with the second track the final, enormous breakthrough succeeded like no one dared to imagine before.

The cover version of Mike Oldfields superhit Moonlight Shadow (originally written around John Lennon's death) was # 3 of Media Control Charts and blessed DJ Novus  in the meantime resident in Ingolstadt - the with a 14-days-residence in the Top 20 of the German Single-selling Charts. Golden record for more than 250 000 sold sound storage media, nomination for an Echo 2003, Mc Mega Music Award 2003  a dream came true ! Since then Groove Coverage toured as Live-act as well as DJ-Act through all parts of Europe and are fireing their audience. At that time Mell, the lead vocalist, was pregnant. She was replaced by background vocalist Verena Rehm in music videos, singles and album covers.

Simoultaneous with the third single, which should also be the fastest #1 of the German DJ Playlist (God is a Girl, Media Control: #8 - a cover of Roxette's song Jefferson... They even got sued for this and had to turn over 50% of their royalties and publishing income for their song) Groove Coverage published their first album called Cover Girl by the end of 2002. By meeting up with Lou Bega they got a songwriter, who everyone should still remember of well because of his Mambo No. 5.

Without taking a long break Groove Coverage worked on completion of the 4th single by using again the very expressive and emotional vocals of Verena (from Neuburg) and Mell (from München), who also contributed the vocals for the whole album.

The End (Media Control Charts # 13) did not meant the end of the group, but was already the beginning of the second album. It contained a melody covered on the eurodance song Give Me You Lovin by DIP, originally composed by Daniel Peyer. Daniel appeared in the credits as John Bakerman. It was followed by the single Poison, a cover of an Alice Cooper song.

2004 : Poison reached position #3 in the German DJ Playlist. Groove Coverage released their next single 7 Years & 50 Days in March as maxi (along with a funny video presenting a special sort of boulimic girl). At the end of March, they performed live at Viva TV show Club Rotation. At the beginning of April, the single entered the Austrian charts directly at position #17.

Poison was released in UK and Ireland after the summer. In October, it entered the Ireland charts at position #7. Then came She in June, a slow and deceiving song. It covered the melody of the Xmas song Stern über Bethlehem originally composed by Alfred Hans Zoller.

Afterwards, the more energetic Runaway was released, reaching #4 in the German official dance chart. The video clip, shot around the them of a race car, featured the lengedary Kai Ebel, a German Formula 1 presentator.

Then came Holy Virgin, which was not featured on the album. This cover-version in English of the song Fata Morgana (by the Austrian group Erste Allgemeine Verunsicherung) reached #2 in the German DJ playlist. Videoclip featured real-TV star Kader Loth

2006 : The next single was called On The Radio, covering the melody of the song Mann im Mond originally sung by Die Prinzen. It was a completely different song (and less powerful) than the one that had leaked on the internet in 2005.

Their Best Of album was nominated to Grammy awards (USA) as Best Dance Recording. They started working on the 3rd album and promised a release between January and April 2006. 21st Century (and not Let It Be as it was at first announced) was finally released at the beginning of July in Germany.

Groove Coverage did a remix for Max Deejay vs DJ Miko What's Up.

The 21st Century album was already released in many European and Asian countries including Japan and Indonesia, it will be soon out in the US, China and Russia.

2007 : Groove Coverage were back with a brand new single entitled Because I Love You. The videos was shot between the 3rd and 6th October, and the single was released on November 9th.

2008 : Groove Coverage announced that they planned to release a recall of their 2000 hit Moonlight Shadow.