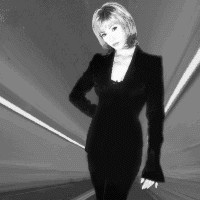 Grace is a British group that made a big hit with their first single Not Over Yet in 1995. One of the producers is no one less than Paul Oakenfold (aka Oakey), the most important DJ in British house and trance music. He is also called the king of Ibiza because of his succesful DJ sets at the party island. He collaborates with another great producer : Steve Osbourne. The frontwoman of the project was named Dominique Atkins.

Not Over Yet had actually been released a first time in 1993. At this time, the project was known as State Of Grace, but it had to be renamed because of a properties rights problem.

It was in 1995 that Dominique first crossed paths with Oakenfold and Osbourne, who were on the lookout for a fresh young talent to both write and perform on a new dance music project they had in mind. The creative fit was perfect and before long, the trio, now known simply as Grace, rocketed up the charts with Not Over Yet, a tune that earned them both critical and popular raves. "A massive club hit with a stratosphere-cruising melody," enthused one critic, while another spelled out this recipe for success: "Take one sexy singer and sprinkle with golden Oakenfold and Osbourne dust and you have the winning formula of Grace."

After the hit Not Over Yet, Grace stormed the UK charts with many sizzling singles, including I Want To Live, Skin On Skin, Down To Earth and If I Could Fly. They finally released their first album If I Could Fly, a sultry, sensuous and simply irresistable album. If I Could Fly was a collection of original tunes that fused the propulsive production chops of Oakenfold and Osbourne with the raw energy of one of today's most daring young divas.

Grace stopped to exist in 1997. Paul Oakenfold couldn't combine it with his DJ Schedule anymore. Dominique went further with Jazz music. In 1999 Sasha & John Digweed made a new mix from the anthem Not Over Yet. In UK it was released as single acompained with a video named Perfecto AllStars feat. Grace Not Over Yet '99 and it reached top 10.

2009 : Dominique Atkins wrote the song Turn On The Radio, which was on the album Plethora by Loverush UK!.

2011 : in July, new remixes of Not Over Yet were released by Perfecto. In December, new tracks for Grace (Dominique Atkins) was announced on Tilt's official Facebook page as being currently written. Titles were Can You Feel It and Falling Again

Thanks to Denis "DJ Hooligan" Zhabkin

Listen to Grace on Radio Euro Classic, the eurodance radio