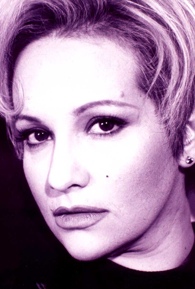 Gottsha (born Sandra Maria Braga Gottlieb in Rio, on October 4th 1969) is a Brazilian singer and actress who have been on the stage since the age of 14. She went to college to study journalism, but her love for music slowly drifted her away from the classroom straight to Rio de Janeiro music scene, where she became known for her stage performance and of course, her singing skills. She was contracted by Spotlight Records and released her first album and single No One To Answer in 1995. No One To Answer, produced by Nino Carlo and Paulo Jeveaux, at Uptown Studios, Rio de Janeiro/Brazil, was sold in more than 50 countries. Since then, she recorded many other songs, appeared in many live shows all over Brazil and shot 2 video clips for MTV. During a time she was being known as "The Gays Queen"

Her second single Break Out was her greatest hit, and was included into the soundtrack of the soap opera Malhação. The follow-up Do You Wanna Love Me ? was produced and mixed by Paulo Jeveaux at Uptown Studio, in Rio de Janeiro. Then came You Can Do Magic and Christmas Time, released in the end of 1995, in collaboration with the singers Claudja and Mr. Jam.

The year 1997 she began to take part in musicals, which gave her the opportunity to develop her talent both as a singer and an actress. In 1998 came the single I Love The Nightlife : released under the label Paradise Records with nine different versions for the disco classic I Love The Nightlife, it was produced by Nino Carlo and FC Nond. It was recorded at Mills Studio and Mega Studio, having a live version recorded at the Delfin Theater, Rio de Janeiro. This song got into a Brazilian Musical called As Malvadas.

Gottsha has many unreleased songs and is looking forward to collaborate with record producers. Nowadays she is acting on a play by Miguel Fallabela.

1999 : she played in the TV mini-series "Chiquinha Gonzaga".

2002 : she gave her voice to the character Roz in the Disney cartoon Monsters Inc.

2003 : Gottsha played the role of Carmem Santana in the TV series "Celebridade".

2005 : she had a role in the telenovela "Senhora do Destino" of Aguinaldo Silva.

2006 : in September, she participated to the musical "Sucessos da Atlântida". In October, she was awarded the Medalha de Mérito Cultural Tomé de Souza.

Listen to Gottsha on Radio Euro Classic, the eurodance radio