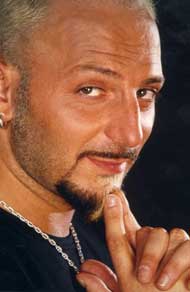 25/08/2018 : Gigi d'Agostino is back with a collaboration with Lithuanian DJ Dynoro entitled In My Mind. It borrows the hookline from Gigi's L'amour toujours (Thanks to Tavi Meran)

Luigi Celestino Di Agostino aka Gigi D'Agostino was born 17 December 1967 in Torino. He did a lots of jobs, and endured lots of suffering to reach today's fame and fortune. He says he would do it all over again... if he was really forced. Anyway his life is really changed, all his desires are realised now. Gigi loves progressive music, even if he twisted it rather than customize it. Mediterranean progressive was born in this way: minimal sounds, catchy melodies, lots of latin and... mediterranean sounds. Gigi has attacked Italy with hits such as Giallone rmx, Fly, Elektro Message, Angel Symphony (with R.A.F. by Picotto), Gigi's Violin and New Year's Dayand, through last compilations, he affirmed himself with Musica and Psicadelica.

He says that same inspirations come from his Salerno's origins and that if he should choose between being a producer or a deejay he would be at a real cross road. "Cause one thing drives another", he explains. Follow-up single was Music: Echo Deep Inside, programmed a lot by radios. Then came Gin Lemon extracted from the eponymous E.P., available with four versions : More Gin Lemon, Gin Lemon, Gin Lemon Dub and Gin Lemon R.A.F Zone Mix.

But it's only with the single Bla Bla Bla that Gigi began to gain international popularity. One could wonder which language had been used in this song. Actually the voice samples used there are just cut and paste from the phrase : "Aware I am am of what you've been", with vocoder distortion effects. According to some people it could have been taken from a verse of Mike Donovan's song Water Spring.

This was not the first time Gigi borrowed samples for other songs : for example, in the previous single Cuba Libre, the sample "If you really like to rock the funky beat" was also used by Jungle Brothers in the track Drum' n' Bass. In the track Coca & Avana you can also hear samples the song Whoomp (There it is) by Tag Team.

Follow-up single The Riddle featured vocals by Adam Austin. It was also a huge hit. Adam Austin also did volcas on songs Star and The Way.

In 2000, Gigi released Another Way, then came La Passion which once again featured Adam Austin.

Gigi D'Agostino's dropped a new single in Autumn 2001 : L'amour Toujours, from the album of the same name. Vocals were done by British-Nigerian singer and songwriter Ola Onabule, who performs both the male and female voice (modified via auto-tune). Success was massive.

2002 : Gigi's next single was Amorelecttronico / One Fly.

2004 : Silence reached positions #19 on the Danish dancechart, #23 in Holland, #37 in Belgium, #22 in Austria, and #18 in the German DJ Playlist. In August, Gigi D'agostino and Datura released a CD-single entitled Summer Of Energy.

2006 : he created his own new record label Noisemaker Hard, to differentiate the style of music released under his older record label, Noisemaker.

2011 : Gigi d'Agostino could release a new 2 CD album at the end of June. His new single was entitled Stay With Me

Gigi was back with a new song entitled Gigi's Time. His hit L'Amour Toujours was chosen by soccer team SS Lazio but when they competed for Supercup in Riyad the vocal parts of the song were censored.